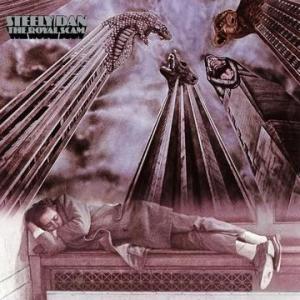 The best copies of Steely Dan’s brilliant effort from 1976 — so different from the album before, Katy Lied, as well as the album to follow, Aja — manage to combine richness and smoothness with transparency and clarity, a tough combination to find on The Royal Scam.

What We’re Listening For on The Royal Scam

If you end up with one of our Hot Stampers, listen carefully for the effects we describe. This is not an easy record to reproduce — everything has to be working in tip-top form to even begin to get this complicated music sounding the way it should — but if you’ve done your homework and gotten your system really cooking, you are in for the time of your Steely Dan life.

By far the most sonically aggressive track on this album, Kid Charlemagne is a quick indicator of what you can expect from the rest of the side. The typical copy is an overly-compressed sonic assault on the ears. The glaring upper midrange and tizzy grit that passes for highs will have you jumping out of your easy chair to turn down the volume. Even my younger employees who grew up playing in loud punk rock bands were cringing at the sound.

The Caves of Altamira

This is the best test for side one. There are sweet cymbals at the beginning, and Fagen’s double tracked voice should be silky and smooth, but on the really hot copies it’s also big and alive. When I was first doing these shootouts, I noted that the high hat is front and center in the mix of this song, and when that high hat sounds grainy or aggressive it’s positively unlistenable. That high hat needs to sound silky and sweet or this song is going to give you a headache, at least at the volume I play it at: GOOD and LOUD.

The vocal chorus on this track can be irritating on the typical copy. ABC pressed out millions of these, and when they did a bad job, or used grainy vinyl, the result is edgy and unpleasant. This is probably why I and many others liked the Japanese version. They used good vinyl, not the grainy garbage ABC did, so even their sub-generation copy tape ended up making a more listenable LP.

But when you hear the real thing, pressed right, from a better tape.. man, it’s awesome!

Love the piano work on this track. Another one of my favorite Steely Dan songs of all time.

The first two tracks on this side tell you everything you need to know about the sound. Most copies are going to be aggressive. There’s an edge to Fagen’s vocals. It’ll become especially apparent when the backing vocals come in on the line, “The rings of rare design”. If it sounds midrangy and edgy, you do not have a good copy. You will probably not find the experience particularly enjoyable. Rather than finding yourself lost in the music, you may find yourself wondering what the fuss was all about when this album came out.

On a musical note, it’s songs like this one and the two that follow that make me realize how ENERGETIC an album this is. It’s actually the last high energy Steely Dan album, second only in that respect to Countdown To Ecstasy.

Lovely, delicate cymbals open this song, with deep, funky bass coming in right after them. (Some copies have hollow sounding bass on this track, and many copies are light in the bass here as well, which just kills the magic.)

But the key to this track is the voice box guitar. On the typically aggressive copy, that sound is irritating as hell. On the good ones, that guitar sounds JUST RIGHT. You know it when you hear it. It ain’t rocket science. There’s nothing fancy about good sound. It’s just CORRECT.

Like I say, that grainy ABC vinyl wreaks havoc with the amount of high frequency information on this recording. Without a good pressing, there’s just too much of that edgy, dry, grainy quality added to the (admittedly) processed vocals and upfront percussion. (The high hat is actually mixed louder than the vocals half the time!)

Another All Time Top Steely Dan song, which continues the energy of this side.

When they concocted The Royal Scam in 1976, Donald Fagen and Walter Becker were under the influence of “a seemingly inexhaustible supply of whatever” (as they put it in their notes to the 1999 reissue), which surely helped them summon the on-the-edge characters who populate the album. “Kid Charlemagne,” which describes the misadventures of a San Francisco acid dealer who has run out of customers and time, introduces a song cycle on which making a getaway is high on the agenda of practically every one of the protagonists.

These urban desperadoes are captured by Fagen and Becker in vignettes as sharply focused and unromanticized as Diane Arbus photos — such as the conjugal combatants of “Everything You Did,” one of whom interrupts the hurling of recriminations to civily suggest, “Turn up the Eagles/The neighbors are listening.”

The individual performances seem to rise out of the narrative itself, thanks to the rarefied capabilites of the hired studio help; having dispensed with their original lineup three years earlier, Fagen and Becker assembled a talent pool composed primarily of jazz specialists who showed they could rock and swing all at once when so inspired.

Drummer Bernard “Pretty” Purdie lashes out the rolling grooves on most of the nine tracks, establishing the album’s anxious feel, and Larry Carlton’s jaw-dropping guitar work provides a running commentary to Fagen’s strangulated vocals, notably on the noir rocker “Don’t Take Me Alive,” in which the howling, jagged opening riff brutally articulates the psyche of a bookkeeper’s son gone wild.

On “Haitian Divorce,” Dean Parks’ extended guitar solo is transformed by Becker’s talk-box manipulation into the quintessence of henpecking. These are not the sort of Steely Dan songs favored by smooth-jazz stations.

The Royal Scam vividly encapsulates that post-Watergate/pre-punk/coked-up moment when you could trust no one, least of all yourself. * * * * * [Five Stars]