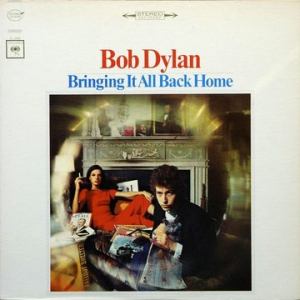 NOTE: There is a mark that plays haflway through track five about eight times at a moderate level.

You may be aware that it is hard to find a 360 Columbia Stereo pressing from 1965 that plays any quieter!

It’s tough to find copies of this album that give you all the tubey richness and warmth that this music needs to sound its best. Too many copies seem to be EQ’d to put the vocals way up front, an approach that renders Dylan’s voice hard and edgy. Copies like that sound impressive at first blush (“Wow, he’s really IN THE ROOM!”) but become fatiguing in short order. When you get a copy like this one that’s smooth, relaxed and natural, the music sounds so good that you forget about the sound and just get lost in the music.

What We’re Listening For on Bringing It All Back Home

Part of this album were recorded at the legendary Columbia 30th Street Studios.

With Another Side of Bob Dylan, Dylan had begun pushing past folk, and with Bringing It All Back Home, he exploded the boundaries, producing an album of boundless imagination and skill. And it’s not just that he went electric, either, rocking hard on “Subterranean Homesick Blues,” “Maggie’s Farm,” and “Outlaw Blues”; it’s that he’s exploding with imagination throughout the record.

After all, the music on its second side — the nominal folk songs — derive from the same vantage point as the rockers, leaving traditional folk concerns behind and delving deep into the personal. And this isn’t just introspection, either, since the surreal paranoia on “It’s Alright, Ma (I’m Only Bleeding)” and the whimsical poetry of “Mr. Tambourine Man” are individual, yet not personal.

And that’s just the tip of the iceberg, really, as he writes uncommonly beautiful love songs (“She Belongs to Me,” “Love Minus Zero/No Limit”) that sit alongside uncommonly funny fantasias (“On the Road Again,” “Bob Dylan’s 115th Dream”). This is the point where Dylan eclipses any conventional sense of folk and rewrites the rules of rock, making it safe for personal expression and poetry, not only making words mean as much as the music, but making the music an extension of the words. 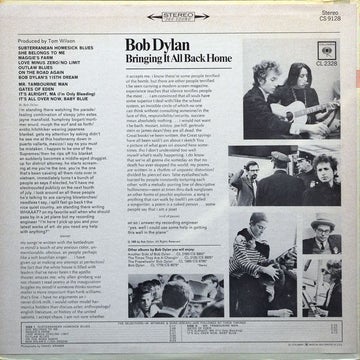