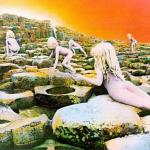 Reviews and Commentaries for Houses of the Holy

Much like The Rain Song, this track is full of dead quiet passages that will virtually always have some audible surface noise. It’s a chronic problem. A copy that plays quieter than Mint Minus Minus for either track is truly exceptional.

One of my all time favorite Zep tracks. Listen to that BIG breath Plant takes right after the quiet bridge in the middle of the song. Wow — he knows he’s still got plenty of loud singin’ left to do!

Tubey Magical Acoustic Guitar reproduction is superb on the better copies of this recording. Simply phenomenal amounts of Tubey Magic can be heard on every strum, along with the richness, body and harmonic coherency that have all but disappeared from modern recordings (and remasterings).

As we’ve noted before, the two Zep albums in which the acoustic guitars are out of this world are this one and III. They are every bit as rich, tubey, sweet, delicate and harmonically correct as the guitars on Tea For the Tillerman, The Best of Bread, or any of the other magical recordings we rave about on the site. (Our Top 100 is full of others if you want to check them out.)

Of course, without the right pressing, hopefully, this one, you would never know that. Later copies (those not cut by Robert Ludwig are not worth the vinyl they were pressed on), Classic copies, typical domestic and import copies — none of them are going to sound like this. You have our guarantee.

Led Zeppelin is responsible for some of the best High-Production-Value rock music of the ’70s. The amount of effort that went into the recording of this album (really, any of the studio albums) is comparable to that expended by the engineers and producers of bands like Supertramp, The Who, Jethro Tull, Ambrosia, Pink Floyd and far too many others to list. It seems that no effort or cost was spared in making the home listening experience as compelling as the recording technology of the day permitted.