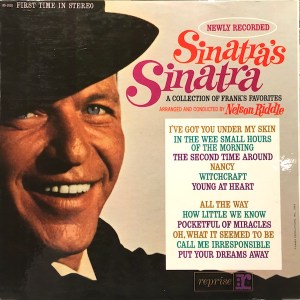 Great bass and weight coupled with lots of space and correct tonality in the midrange add up to only one thing: Triple Plus or close to it sound on both sides!

We know a fair bit about the man’s recordings at this point. As of today we’ve done commentaries for more than 21 different Sinatra shootouts, and that’s not even counting the ten or twenty other titles that either bombed or were sold off years ago.

This vintage Reprise stereo pressing has the kind of Tubey Magical Midrange that modern records rarely begin to reproduce. Folks, that sound is gone and it sure isn’t showing any sign of coming back.

Hot Stamper sound is rarely about the details of a given recording. In the case of this album, more than anything else a Hot Stamper must succeed at recreating a solid, palpable, real Sinatra singing live in your listening room. The better copies have an uncanny way of doing just that.

What We’re Listening For on Sinatra’s Sinatra

All The Way
How Little It Matters How Little We Know
Pocketful Of Miracles
Oh! What It Seemed To Be
Call Me Irresponsible
Put Your Dreams Away

In the early ’60s, Columbia and Capitol were issuing collections of Frank Sinatra’s biggest hits, which tended to sell quite well. Sinatra’s Sinatra was the singer’s attempt to get a piece of that action for his new record label, Reprise. Arranged and conducted by Nelson Riddle, the album is a collection of re-recorded versions of 12 of his favorite songs, including two new charts (“Nancy [With the Laughing Face]” and “Oh! What It Seemed to Be”). Some of his biggest hits and most famous songs are included in his picks, including “I’ve Got You Under My Skin” and “Young at Heart”.