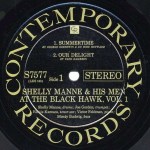 Our Hot Stamper commentary from a long-ago shootout we had done for the wonderful Helen Humes album Songs I Like to Sing discusses the sonic characteristics we find most commonly associated with the various Contemporary labels.

This Contemporary Black Label Original LP has that classic tube-mastered sound — warmer, smoother, and sweeter than the later pressings, with more breath of life. Overall the sound is well-balanced and tonally correct from top to bottom, which is rare for a black label Contemporary, as they are usually dull and bass-heavy.

We won’t buy them locally anymore unless they can be returned. I’ve got a box full of Contemporarys with bloated bass and no top end that I don’t know what to do with.

Like most mediocre-to-bad sounding records around here, they just sit in a box taking up space. All of our time and effort goes into putting good pressings on the site and in the mailings. It’s hard to get motivated to do anything with the leftovers. We paid plenty for them, so we don’t want to give them away, but they don’t sound good, so most of our customers won’t buy them. 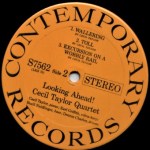 What to do, what to do? Ebay I guess, but that’s a long way down the road. It’s too much fun doing listings for good records these days to want to stop now. The average record is just average, and nothing is ever going to change that!

We shot this out against a variety of later pressings. The Black Label copies have a bit of echo added to the vocals and have the attributes listed above — warmth, sweetness, presence, and immediacy. The later pressings offer superior clarity and resolution. I wouldn’t say one is necessarily better than the other; it’s really more a matter of taste.

More on the subject of Record Labels.

A Word About OJC Pressings

OJC versions of Contemporary Records albums can be excellent. Those tend to be the ones we say nice things about. But most of the time the pressings that were mastered and put out by Contemporary in the mid ’70s on the yellow label (until they were bought by Fantasy) are superior.

Again, you have to play them to know which are which.

We are also big fans of the OJCs that come with the long strips on the cover. They tend to be mastered pre-Phil De Lancie (maybe by George Horn, one of our favorite mastering engineers), and usually sound much better than the pressings that followed.

My understanding is that Bernie Grundman was cutting a lot of records for Contemporary in those days. If that’s true he was doing a great job because those are some truly wonderful sounding records.