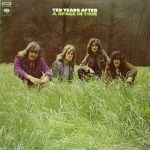 Reviews and Commentaries for A Space in Time

This is some of the best High-Production-Value rock music of the ’70s. The amount of effort that went into the recording of this album is comparable to that expended by the engineers and producers of bands like Supertramp, Yes, Jethro Tull, Ambrosia, Pink Floyd and too many others to list. It seems that no effort or cost was spared in making the home listening experience as compelling as the recording technology of the day permitted. (Of course, as it turns out, recording technology only got worse as the decade wore on, and during the ’80s the sound of most records went off a cliff.) Big Production British Rock & Roll just doesn’t get much better than A Space in Time.

You don’t need tube equipment to hear the prodigious amounts of Tubey Magic that exist on this recording. For those of you who’ve experienced top quality analog pressings of Meddle or Dark Side of the Moon, or practically any jazz album on Contemporary, whether played through tubes or transistors, that’s the luscious sound of Tubey Magic, and it is all over A Space in Time.

Just listen to the guitar solo on ‘Let The Sky Fall’. It comes complete with layer upon layer of guitars, acoustic and electric, with some backwards guitar thrown in for good measure. And that’s just the guitar parts. This kind of dense aural soundscape, presented with so many carefully placed elements from side to side and front to back, makes repeated listenings especially rewarding.

No matter how many times you play the album, you are likely to hear (and hopefully appreciate) something new in the mix. I’ve been playing ASIT for forty years (bought my copy when I was still in high school) and I heard lots of things this time around I never knew were there. This is why we keep improving our systems, right? There is never going to be a time when these nearly forty year old recordings have nothing new to offer.

Their Only Essential Album

By the way, this was the first Ten Years After record I ever bought, and I liked it so much I went out and bought many of their other albums, only to find that none of those albums are anything like this one. None of them sound particularly good; none of them are particularly well produced; and most of the music is fairly forgettable British Blues Rock.

We consider this album a Masterpiece. It’s a recording that belongs in any serious Rock Music Collection.