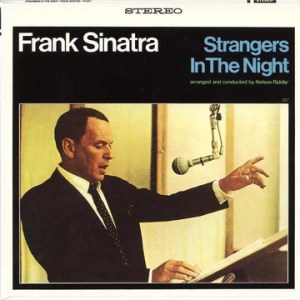 We cannot recommend this pressing highly enough. If you want to know what the best sounding Sinatra records sound like, this is your chance. Folks, in my opinion it simply does not get any better than a killer White Hot Stamper of Strangers In The Night.

These originals are the only way to go for ’60s Sinatra, but finding them in good shape on quiet vinyl is no picnic and only a few of them actually sound the way we want them to. It’s a real treat to be in the presence of the Chairman Of The Board, in his prime, working his magic — but only an exceptional copy like this one has the power to put him right in the room with you.

The Tubey Magic has to be heard to be believed. I cannot recall hearing a richer, smoother, tubier Frank Sinatra album in all my born days.

Weighty brass is key to the sound of more than just the horn section. Any leanness or thinness in the brass is instantly heard as Sinatra without weight and richness to his voice. This is the instantly recognizable sound of most reissues, the main reason we stopped buying them years ago. Having played so many amazing original stereo pressings for our shootouts over the years we don’t think that will change anytime soon. There simply is no substitute for a clean stereo pressing on the original label.

Full, Rich, Breathy, Present vocals are obviously critically important as well. This copy delivers some of the best we heard.

On this copy the orchestra and band are putting out plenty of low end, reaching down well into whomp land. It’s a thrill to hear to hear that sound on these swinging arrangements coming out of my speakers.

And of course the copies that are rich and tubey but also big, clear and open did the best in our shootout.

The famous title track is from a different session and does not sound as good as the rest of the album, so skip right to Summer Wind — now that’s Sinatra at his nice and easy best, with sound to match.

What We’re Listening For on Strangers In The Night

One of the top guys at Warners and Reprise, Lee engineered this album as well as a great many others for Sinatra. You’ll find Herschberg’s name in the credits of many of the best albums by Ry Cooder, The Doobie Brothers and Gordon Lightfoot, titles we know to have excellent sound on the best copies — not to mention an album most audiophiles know all too well, Rickie Lee Jones’ debut. His pop and rock engineering credits run for pages.

The most amazing jazz piano trio recording we know of is on the list of his credits as well: The Three (Shelly Manne, Ray Brown and Joe Sample), as well as most of the other Direct to Disc recordings released on Eastwind.

The album that gets my vote for Herschberg’s Pop Engineering Masterpiece would have to be Michael McDonald’s If That’s What It Takes. On the best copies the sound is out of this world.

Strangers in the Night
Summer Wind
All or Nothing at All
Call Me
You’re Driving Me Crazy!

On a Clear Day (You Can See Forever)
My Baby Just Cares for Me
Downtown
Yes Sir, That’s My Baby
The Most Beautiful Girl in the World

Strangers in the Night marked Frank Sinatra’s return to the top of the pop charts in the mid-’60s, and it consolidated the comeback he started in 1965. Although he later claimed he disliked the title track, the album was an inventive, rich effort from Sinatra, one that established him as a still-viable star to a wide, mainstream audience without losing the core of his sound.

Combining pop hits (“Downtown,” “On a Clear Day [You Can See Forever],” “Call Me”) with show tunes and standards, the album creates a delicate but comfortable balance between big band and pop instrumentation. Using strings, horns, and an organ, Nelson Riddle constructed an easy, deceptively swinging sound that appealed to both Sinatra’s dedicated fans and pop radio.

And Sinatra’s singing is relaxed, confident, and surprisingly jazzy, as he plays with the melody of “The Most Beautiful Girl in the World” and delivers a knockout punch with the assured, breathtaking “Summer Wind.” Although he would not record another album with Riddle again, Sinatra would expand the approach of Strangers in the Night for the rest of the decade.