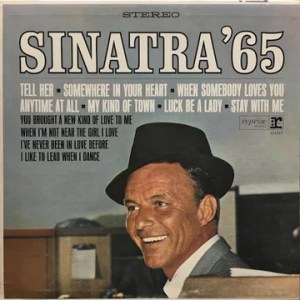 Is the title a play on Capitol’s gazillion selling Beatles ’65? Only Frank really knows.

This original Green and Blue Reprise stereo pressing has the sound we look for — big, rich and tubey.

What We’re Listening For on Sinatra ’65

Frank Sinatra led a double-life as a recording artist in the 1960s. One side of him pursued his vision as the nation’s greatest interpreter of American standards (“adult music,” he called it), while another side of him was obsessed with making records that cracked the Nation’s Top 40 playlist (“kiddie pop”).

This album reflects that attitude, with pop tunes produced and arranged by the proven hit-making team of Jimmy Bowen and Ernie Freeman, and standards arranged by Nelson Riddle, Don Costa, and Billy May. In fact, “Sinatra ’65” is very much like “Softly As I Leave” released the year before, a mix of pop tunes and standards, only better.

Two of the songs—“My Kind of Town,” arranged by Nelson Riddle, and “Luck Be A Lady,” arranged by Billy May, went on to join the short list of Sinatra’s greatest and most recognizable signature songs for Reprise Records. Three of the four songs produced and arranged by Jimmy Bowen and Ernie Freeman joined the list of Sinatra pop tunes that reached the Top 40, a list that includes “Strangers in the Night” and “Somethin’ Stupid.”

All in all, the album makes for an entertaining listening experience, but there’s no mistaking the Bowen-Freeman tunes with their heavy emphasis on beat, countrypolitan cadenzas, and doo-wah choir. According to the liner notes, Riddle, May and Costa employed four-or-five piece rhythm sections, while Bowen-Freeman stacked the deck with ten-or-twelve piece rhythms sections. “That’s the basic difference,” says Bowen, “the big, heavy, thumping rhythm section.” Why the heavy rhythm? “That’s where the feeling comes from,” says Bowen. “Feeling is the most important thing in any record.”

Bowen refers to the tunes he recorded with Sinatra as country music. “Every time you do something with a country song or a country flavor you have a better chance of reaching more people than with any other kind of song.” And there you have it, an album of four Bowen-Freeman countrypolitan tunes designed for the masses, and seven standards that defy time and fickle trends, five arranged by Nelson Riddle, and one each by Don Costa and Billy May.

I have owned this album on vinyl since 1972, when I first discovered the music of Frank Sinatra (and it was the first Sinatra LP I purchased, out of my own allowance, as I was just 13 years old at the time). I am here to tell you that this is a big, bold and beautiful Sinatra album. Sinatra is at his zenith.

[His] voice is in super top form on every selection in this album. “Tell Her (You Love Her Each Day)” and “When Somebody Loves You” were recorded in Hollywood on April 14, 1965 and these selections were arranged by Ernie Freeman. They have a fresh, new (in 1965) driving beat and chorus behind Sinatra and although some fans don’t particularly care for the Ernie Freeman treatment, I personally love it. It showed that Sinatra could indeed swing with the times by putting his golden voice to a new sound, while remaining distinctively Sinatra.

More traditionally arranged numbers on the album include “Main Theme from The Cardinal” where Sinatra has a chance to magnificently stretch his chords to serious depths and “I’ve Never Been In Love Before” containing all the strings and sentimental verse we associate with Sinatra. The album ends with a powerful, Vegas-like Sinatra of “Luck Be A Lady”. One can almost see Frank smiling while he shoots the dice.