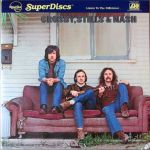 An audiophile record dealer (of course; who else?) once raved to me about Crosby Stills and Nash on Nautilus. I said “What are you talking about? That version sucks!” He replied “No, it’s great. Helplessly Hoping sounds amazing.”

Now one thing I know about the Nautilus is that although it is wonderfully transparent in the midrange, it may very well take the cake for the most bloated, out of control bass in the history of Half Speed mastering. What song on that album has almost no bass, just lovely voices in the midrange? You guessed it. Helplessly Hoping.

The Nautilus got one track right, and ruined the rest. Using that track for comparison will fool you, and when it comes time to play a side of the album, you will quickly hear what a disaster it is.

Or maybe you won’t. Who else harps on bad Half-Speed Mastered bass outside of those of us who write for this blog? I don’t recall ever reading a word about it. This does not reflect well on the bass response of the modern audiophile stereo.