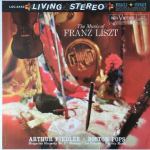 Reviews and Commentaries for the Recordings of Arthur Fiedler

The rich, textured, rosin-on-the-bow lower strings on this record are to die for.

Find me a modern record with that sound and I will eat it.

And by “modern record” we hasten to include both modern recordings and modern remasterings of older recordings. No one alive today can make a record that sound like this. To call it a lost art is to understand something that few vinyl-loving audiophiles appear to have fully grasped since the advent of the Modern Reissue, which is simply this: compared head to head they are simply not competitive.

After twenty years of trying and literally hundreds of failed examples, both the boutique and major labels of today have yet to make a record that sounds as powerful or as lifelike as this RCA from the old days. (This is actually a later pressing; in some ways it sounded more tubey and rich than many of the Shaded Dogs we played against it.)

Wikipedia on Hungarian Rhapsody No. 2

The Hungarian-born composer and pianist Franz Liszt was strongly influenced by the music heard in his youth, particularly Hungarian folk music, with its unique gypsy scale, rhythmic spontaneity and direct, seductive expression. These elements would eventually play a significant role in Liszt’s compositions. Although this prolific composer’s works are highly varied in style, a relatively large part of his output is nationalistic in character, the Hungarian Rhapsodies being an ideal example.

Composed in 1847 and dedicated to Count László Teleki, Hungarian Rhapsody No. 2 was first published as a piano solo in 1851 by Senff and Ricordi. Its immediate success and popularity on the concert stage soon led to an orchestrated version, arranged by the composer in collaboration with Franz Doppler, and published by Schuberth. In addition to the orchestral version, the composer arranged a piano duet version in 1874, published by Schuberth the following year.

By the late 19th century and early 20th century, the excruciating technical challenges of the piano solo version led to its acceptance as the “unofficial standard” by which every notable pianist would “prove his salt”, usually as a smashing finale.[citation needed] It had become an expected staple of virtually every performance of the greatest pianists of the time. Offering an outstanding contrast to the serious and dramatic lassan, the following friska holds enormous appeal for audiences, with its simple alternating tonic and dominant harmonization, its energetic, toe-tapping rhythms, and breath-taking “pianistics”.

All Music Guide on Mazeppa

Franz Liszt was the inventor of the symphonic poem (also known as the tone poem), a form in which a literary or other nonmusical source provides a narrative foundation for a single-movement orchestral work. Liszt’s symphonic poems, however, were not exclusively dependent on their source material: the composer’s goal was more to distill the essence of the poetic concept in music rather than to exactly recreate it. Mazeppa (1851) is the sixth of the twelve symphonic poems Liszt wrote during his tenure as Grand Ducal Director of Music Extraordinary at Weimar. All twelve works are dedicated to Princess Carolyne Sayn-Wittgenstein. The story upon which the work is based is that of Ivan Mazeppa, a Polish nobleman of the seventeenth century who was a page in the court of the King of Poland. Mazeppa became entangled in a love affair with the young wife of a count; when the count discovered this, he tied Mazeppa to the back of a wild horse and chased the horse into the desert. The horse eventually collapsed, and the half-dead Mazeppa was rescued by the Cossacks. He stayed with them and in due time fought with them against the Russian czar Peter the Great, eventually becoming the Cossack leader.

In his student days in Paris, Liszt became familiar with the works of Byron and Hugo, both of whom wrote poems on Mazeppa. The story contained many attractions for the young composer, including a spectrum of characteristically Romantic literary elements: human suffering, catastrophe, and triumph. Mazeppa is a much altered and richly orchestrated version of Liszt’s same-titled “Transcendental” piano etude. Aside from purely orchestrational concerns, Liszt’s changes to his pre-existing music served primarily to fit the work more closely to the narrative of the Mazeppa story. The music starts with the onomatopoetic sounds of the horse being whipped into flight. The well-known “Mazeppa theme” appears in the trombones and strings, continuing unabated in numerous variations until the fall of Mazeppa’s horse, which is represented by a tutti chord punctuated by triplet timpani strokes. The concluding section, which concerns itself with Mazeppa’s rescue, culminates in a heroic march on a theme the composer borrowed from his earlier Arbeiterchor for bass voice, male chorus, and piano (1848). The march theme combines victoriously with the “Mazeppa theme” for an exciting, if somewhat bombastic, finale.

Les Préludes, the most popular of Liszt’s thirteen symphonic poems, had its beginning in 1844, when the composer met the French poet Joseph Autran in Marseilles at a banquet in Liszt’s honor. Within days, Liszt set one of Autran’s poems, Les Aquilons (“The Winds”), for mixed chorus and piano; this work was performed by a local chorus almost before the ink had dried. Liszt set three further of Autran’s poems – Les Flots (“The Oceans”), Les Astres (“The Stars”) and La Terre (“The Earth”) while on tour in Spain the following year.

In 1848, Liszt, having made a study of orchestration during the intervening years, tried his new-found skill in an overture called The Four Elements to preface the quartet of vocal compositions set to Autran’s verses. Three years later (by which time the overture had been rechristened Symphonic Meditations), Autran sent Liszt his Poèmes de la Mer. Reading these verses recalled to Liszt his earlier pieces inspired by the poet and, referring to the overture and four choruses, he replied, “We will do something with it one fine day.” Between 1852 and 1854, Liszt, indeed, did something with it — he completely recomposed the overture as a symphonic poem, and presented it in 1854 under the title Les Préludes.

During the revision process, Liszt discovered that a long, meditative poem by the French writer and statesman Alphonse de Lamartine evoked emotions similar to those he envisioned in his music. It was from the title of Lamartine’s poem – Les Préludes from the collection entitled Nouvelles méditations poétiques – that Liszt derived the name for his new work. Though the words have little more in common with the music than a general sharing of contrasting sentiments (love–war), Liszt chose to preface the published score with his prose interpretation of the original poem:

What else is life but a series of preludes to that unknown hymn, the first and solemn note of which is intoned by Death? Love is the enchanted dawn of all existence; but what fate is there whose first delights of happiness are not interrupted by some storm, whose fine illusions are not dissipated by some mortal blast, consuming its altar as though by a stroke of lightning? And what cruelly wounded soul, issuing from one of these tempests, does not endeavor to solace its memories in the calm serenity of rural life?

Nevertheless, man does not resign himself for long to the enjoyment of that beneficent warmth which he first enjoyed in Nature’s bosom, and when the ‘trumpet sounds the alarm’ he takes up his perilous post, no matter what struggle calls him to its ranks, that he may recover in combat the full consciousness of himself and the entire possession of his powers.

Liszt was the originator of the “symphonic poem,” a one-movement orchestral composition whose music bears a relationship to a literary work, painting, historical event, legend, topographical feature or some other extra-musical stimulation.

The symphonic poem, a genre later enthusiastically adopted by many other composers, is sectional in design, with frequent borrowing from such traditional forms as the sonata and rondo.

Les Préludes loosely resembles a sonata form. It opens with a slow introduction which presents the work’s principal theme. Much of the music that follows grows from transformations of this germinal melody. The theme is presented in a bold, vigorous version by trombones to begin the sonata form proper, and is soon joined by a swaying, complementary melody sung by the horns.

The “development” section contains sentiments first martial, then loving, and finally pastoral. The “recapitulation” is devoted mostly to the lyrical complementary theme. The brilliant coda, a grand, heroic transformation of the main theme again led by the trombones and tuba, brings Les Préludes to a stirring close.

The Rakoczy March is one of fifteen Hungarian marches that Franz Liszt used in his composition Hungarian Rhapsody for Piano. He later arranged it for orchestra, pre-dating Berlioz’s arrangement of the same theme in The Damnation of Faust. The pace of the March has varied in performance depending on the director and occasion, ranging in tempo from a typical march beat to that of a procession. In any case, the energetic force of the composition should be maintained and the dynamics adhered to.