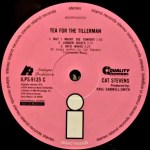 About ten years ago we auditioned and reviewed the 2011 edition of Tea for the Tillerman pressed by Analogue Productions, the one that came on a single Heavy Vinyl 33 RPM LP.

I wrote a very long commentary about the sound of that record, taking it to task for its manifold shortcomings, at the end of which I came to the conclusion that the proper sonic grade for such a record is F as in Fail. My exhaustive review can be found under the not-very-subtle title This Is Your Idea of Analog?

Our intro gave this short overview:

Yes, we know, the folks over at Acoustic Sounds, in consultation with the late George Marino at Sterling Sound, supposedly with the real master tape in hand, and supposedly with access to the best mastering equipment money can buy, labored mightily, doing their level best to master and press the Definitive Audiophile Tea for the Tillerman of All Time.

It just didn’t come out very well, no matter what anybody tells you.

Recently I was able to borrow a copy of the new 45 cutting from a customer who had rather liked it. I would have never spent my own money to hear a record put out on the Analogue Productions label, a label that has an unmitigated string of failures to its name. But for free? Count me in!

The offer of the new 45 could not have been more fortuitous. I had just spent a number of weeks playing a White Hot Stamper Pink Label original UK pressing in an attempt to get our new Playback Studio sounding right.

We initially thought the room was doing everything right, because our Go To setup disc, Bob and Ray, sounded super spacious and clear, bigger and more lively than we’d ever heard it. That’s what a 12 foot high ceiling can do for a large group of musicians playing live in a huge studio, in 1959, on an All Tube Chain Living Stereo recording. The sound just soared.

But Cat Stevens wasn’t sounding right, and if Cat Stevens isn’t sounding right, we knew we had a Very Big Problem. Some stereos play some kinds of records well and others not so well. Our stereo has to play every kind of record well because we sell every kind of record there is. You name the kind of music, we probably sell it. And if we offer it for sale, we had to have played it and liked the sound, because no record makes it to our site without being auditioned and found to have excellent sound.

I could write for days about what to listen for in the song, but for now let me just point the reader to one of the most difficult parts to reproduce correctly.

At about 50 seconds into the track, Cat repeats the first verse:

Only this time he now has a multi-tracked harmony vocal singing along with him, his own of course, and he himself is also singing the lead part louder and more passionately. Getting the regular vocal, call it the “lower part,” to be in balance with the multi-tracked backing vocal, call it the “higher part,” turned out to be the key to getting the bottom, middle and top of the midrange right.

When doing this kind of critical listening we play our records very loud. Live Performance level loud. As loud as Cat could sing, that’s how loud it should be when he is singing his loudest toward the end of the song for the final “But I might die tonight!” If he is going to sing loudly, I want my stereo to be able to reproduce him singing as loud as he is actually singing on the record. No compression. No distortion. All the energy. That’s what I want to hear.

The last fifteen seconds or so of the song has the pianist (Cat himself) banging out some heavy chords on the piano. If you have your levels right it should sound like there is a real piano at the back of the room and that someone is really banging on it. It’s a powerful coda to the song.

A Labor of Love

It has been my experience that not many systems can play as cleanly and loudly as our system can, while still maintaining the highest levels of resolution,  spatiality and depth. Having worked on the same stereo system for more than twenty years, trying to get it to do all of those things, I don’t have any problem believing that our stereo really does succeed at sounding dramatically more like live music than any other I have heard. It is the main reason it is easy for us to do the work we do. (There is a link at the bottom of this review with more information on our equipment for those who are interested.)

The energy was there, the breathiness and Tubey Magical richness to Cat’s voice was present, the bass was huge and tight, the piano solid and sitting well back to the right and rear of the stage — in short, the presentation of each element seemed correct and in balance with all the other elements of the recording.

More changes were to come, but they were refinements to a sound that was at least 90% correct already. Having reached that milestone, we knew we owed practically all of our progress to the endless days we spent playing that one song over and over. For the record, I would like to stipulate that But I Might Die Tonight, all two minutes of it, is a song I now know inside and out. Like an expert witness called into court, I can demonstrate that I have earned the right to judge any stereo playing this song. Likewise I am confidant in my ability to judge the quality of any version of the song, whether on vinyl, CD, or any other media you care to name.

I know the album well too. I think the first audiophile pressing I ever bought was the MoFi, and even back then, with the Old School Audio Research tube equipment and Fulton J speakers I had, I could hear that the MoFi Tillerman was bright, phony and unbalanced compared to my Brown Label A&M LP. Somebody in The Absolute Sound wrote a very negative review of the UHQR around that time, and it wasn’t long after that that all the Mobile Fidelity records on the TAS Super Disc List (I recall there were four at one time) were deleted and shoved down the memory hole, never to be mentioned again.

We TAS-heads, the Golden Eared Few, recommending that shit? Surely you must be joking! As an audiophile record dealer in the ’80s I made a lot of money selling MoFi pressings. You may find it hard to believe, but at that time there was a warehouse that wholesaled sealed Mobile Fidelity UHQRs for $9 each. You could buy Tillerman, Finger Paintings, I Robot and the two classical titles, Pines and Planets, from me for $25, and I would sell you as many as you wanted. I recently dug up some old catalogs and perhaps I will tell more of that story down the road.

I bought my first Pink Label Island pressing in a used record store sometime in the ’80s and even though it has a bad scratch on the first track, I think it’s still here somewhere, probably sitting on our Reference shelf. I even left the $3.99 price tag on it. It’s a good pressing but it’s no match for some of the killer copies we have come across since, all 3U/3U and cut by Lee Hulko.

And modern cleaning technologies take everything to a whole new level we could have never imagined back in the day. See the Revolutions in Audio link at the bottom of Part II for more on that.

Enough with the Backstory Already

What about George Marino’s 45? That’s Part II of our story.