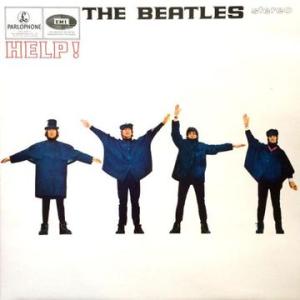 Want to hear The Beatles at their Tubey Magical best? Just play You’ve Got to Hide Your Love Away on this copy.

One of the reasons this song stands out in a crowd of great tracks is that there are only acoustic instruments being played. There’s not an electric guitar to be found anywhere in the mix, one of the few tracks on side one for which that is true.

We flip out over the Tubey Magical acoustic guitars and harmony vocals found on early Beatles albums, and this song can be an exceptionally good example of both when you’re lucky enough to have the right pressing playing.

What amazing sides on Help have to offer is not hard to hear:

I can’t tell you how many crude, high-frequency-challenged, harmonically distorted early Brit copies of Help we’ve played in our shootouts over the years. Some of the old cutting equipment clearly can be heard adding its own layer of distortion to the distortion that’s already on the tape. Remember, this is a four track recording with plenty of bounce downs in the final mix.

That said, on the best copies of Help the presence of the vocals and guitars is so real it’s positively startling at times. Turn up the volume good and loud on some of these tracks and it will be as if John and Paul were right there in your living room. For side one I would go with You’ve Got to Hide Your Love Away or I Need You, and for side two try It’s Only Love or I’ve Just Seen a Face.

What We’re Listening For on Help

You’ve Got To Play Them To Know How They Sound

The best import copies of this album sound AMAZING, but the average one is fairly mediocre. Most tend to be dull, lacking upper midrange presence as well as extension up at the very top. They look fine, they look like they should have an extended top end, but not that many do.

It just goes to show that the only way to find out if a record sounds any good is by playing it. We don’t imagine many people have the extra time that’s required to find, clean, and play multiple import copies of this record — so why not let us do the work for you so that you can spend your free time ENJOYING this wonderful album?

Help! (A Number One Hit)
The Night Before

One of the biggest problems we found with this album is for the top end to be somewhat lacking. On the better copies, the cymbals on this track will sound correct and lively.

You’ve Got to Hide Your Love Away

One of the reasons this song sounds so good is that there are only acoustic instruments being played. There’s not an electric guitar to be found anywhere in the mix, one of the few tracks that can make that claim. We love the Tubey Magical guitars and voices found on early Beatles albums, and this song is a good example of both.

One of the best sounding tracks on the album. The better copies have an exceptionally sweet and open top end. John’s voice is double tracked and sounds wonderful.

You Like Me Too Much
Tell Me What You See

This track has harmonic distortion which can clearly be heard on the vocals. When the chorus comes in it’s quite obvious that there are extra generations of tape between you and The Beatles.

That said, the better the copy the less the shortcomings of the pressing will add to the distortion that’s already on the tape.

This is potentially one of the best sounding tracks on side two. If you have a Hot Stamper and want to impress your audiophile friends, this track should do the trick.

Yesterday (A Number One Hit)

We stand by our earlier assertion that this song can sound wonderful on a German pressing (the rest of the album not so much).The right Brit pressings deliver plenty of warmth, sweetness, and midrange magic on this beautiful song. Just listen to the texture on the strings to hear what’s right about the estimable Norman Smith’s one-inch, four-track, all-tube engineering.

Not one of the better sounding songs on Help, but a good test for tonality. If your copy is even slightly bright this track will tear your head off.

Since Lennon wrote a third more songs than McCartney, it’s easy to forgive a pair of minor numbers (“It’s Only Love,” “Tell Me What You See”), especially since they’re overshadowed by four great songs. His Dylan infatuation holds strong, particularly on the plaintive “You’ve Got to Hide Your Love Away” and the title track, where the brash arrangement disguises Lennon’s desperation.

Driven by an indelible 12-string guitar, “Ticket to Ride” is another masterpiece and “You’re Going to Lose That Girl” is the kind of song McCartney effortlessly tosses off — which he does with the jaunty “The Night Before” and “Another Girl,” two very fine tunes that simply update his melodic signature.

He did much better with “I’ve Just Seen a Face,” an irresistible folk-rock gem, and “Yesterday,” a simple, beautiful ballad whose arrangement — an acoustic guitar supported by a string quartet — and composition suggested much more sophisticated and adventurous musical territory, which the group immediately began exploring with Rubber Soul.