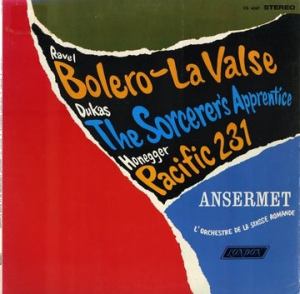 The sound is clear, with wonderful depth to the stage. As a rule, the classic ’50s and ’60s recordings of Ansermet and the Suisse Romande in Victoria Hall are as big and rich as any you may have ever heard. These recordings may just be the ideal blend of clarity and richness, with depth and spaciousness that will put to shame 98% of the classical recordings ever made.

Again, this side had OUTSTANDING energy and dynamic power the likes of which we think you may never have heard.

Boasting some of the best sound of the three works we played on this copy. Again, with that wondrously huge hall adding a sense of space that will allow your speakers to disappear. The performers are not too close, which is very much in keeping with live music.

This vintage London Stereo pressing has the kind of Tubey Magical Midrange that modern records can barely BEGIN to reproduce. Folks, that sound is gone and it sure isn’t showing signs of coming back. If you love hearing INTO a recording, actually being able to “see” the performers, and feeling as if you are sitting in the concert hall, this is the record for you. It’s what vintage all analog recordings are known for —this sound.

What the Best Sides of These Works by Ravel, Honegger and Dukas Have to Offer Is Not Hard to Hear

What We’re Listening For on Works by Ravel, Honegger and Dukas

Michael Brenner was the producer, Roy Wallace the engineer for these sessions from February of 1963 in Geneva’s glorious-sounding Victoria Hall. It’s yet another remarkable disc from the Golden Age of Vacuum Tube Recording.

Boléro is a one-movement orchestral piece by the French composer Maurice Ravel (1875–1937). Originally composed as a ballet commissioned by Russian actress and dancer Ida Rubinstein, the piece, which premiered in 1928, is Ravel’s most famous musical composition.

Before Boléro, Ravel had composed large-scale ballets (such as Daphnis et Chloé, composed for the Ballets Russes 1909–1912), suites for the ballet (e.g. the second orchestral version of Ma mère l’oye, 1912), and one-movement dance pieces (for example La valse, 1906–1920). Apart from these compositions intended for a staged dance performance, Ravel had demonstrated an interest in composing re-styled dances, from his earliest successes—the 1895 Menuet and the 1899 Pavane—to his more mature works such as Le Tombeau de Couperin, which takes the format of a dance suite.

Boléro epitomizes Ravel’s preoccupation with restyling and reinventing dance movements. It was also one of the last pieces he composed before illness forced him into retirement. The two piano concertos and the song cycle Don Quichotte à Dulcinée were the only completed compositions that followed Boléro.

Pacific 231 is an orchestral work by Arthur Honegger, written in 1923. Honegger was widely known as a train enthusiast, and once notably said: “I have always loved locomotives passionately. For me they are living creatures and I love them as others love women or horses.”

It is one of his most frequently performed works.

The popular interpretation of the piece is that it depicts a steam locomotive, one that is supported by the title of the piece alongside film versions. Honegger explained that he wrote it as an exercise in building momentum while the tempo of the piece slows. He originally titled it Mouvement Symphonique, only giving it the name Pacific 231, a class of steam locomotive designated in Whyte notation as a 4-6-2, with four pilot wheels, six driving wheels, and two trailing wheels (the French, who count axles rather than wheels, call this arrangement 2-3-1) after it was finished.

Wikipedia on The Sorcerer’s Apprentice

The Sorcerer’s Apprentice (French: L’apprenti sorcier) is a symphonic poem by the French composer Paul Dukas, completed in 1897. Subtitled “Scherzo after a ballad by Goethe”, the piece was based on Johann Wolfgang von Goethe’s 1797 poem of the same name. By far the most performed and recorded of Dukas’s works, its notable appearance in the Walt Disney 1940 animated film Fantasia has led to the piece becoming widely known to audiences outside the classical concert hall.

Inspired by the Goethe poem, Dukas’s work is part of the larger Romantic genre of programmatic music, which composers like Franz Liszt, Claude Debussy, Jean Sibelius and Richard Strauss increasingly explored as an alternative to earlier symphonic forms. Unlike other tone poems, such as La mer by Debussy or Finlandia by Sibelius, Dukas’s work is, like works such as Till Eulenspiegel’s Merry Pranks by Strauss, descriptively programmatic, closely following the events described in the Goethe poem. It was customary, in fact, to publish the poem as part of the orchestral score.

La valse, poème chorégraphique pour orchestre (a choreographic poem for orchestra), is a work written by Maurice Ravel between February 1919 and 1920; it was first performed on 12 December 1920 in Paris. It was conceived as a ballet but is now more often heard as a concert work.

The work has been described as a tribute to the waltz; the composer George Benjamin, in his analysis of La valse, summarized the ethos of the work: “Whether or not it was intended as a metaphor for the predicament of European civilization in the aftermath of the Great War, its one-movement design plots the birth, decay and destruction of a musical genre: the waltz.” Ravel himself, however, denied that it is a reflection of post-World War I Europe, saying, “While some discover an attempt at parody, indeed caricature, others categorically see a tragic allusion in it – the end of the Second Empire, the situation in Vienna after the war, etc… This dance may seem tragic, like any other emotion… pushed to the extreme. But one should only see in it what the music expresses: an ascending progression of sonority, to which the stage comes along to add light and movement.” He also commented, in 1922, that “It doesn’t have anything to do with the present situation in Vienna, and it also doesn’t have any symbolic meaning in that regard. In the course of La Valse, I did not envision a dance of death or a struggle between life and death. (The year of the choreographic setting, 1855, repudiates such an assumption.)”

In his tribute to Ravel after the composer’s death in 1937, Paul Landormy described the work as “the most unexpected of the compositions of Ravel, revealing to us heretofore unexpected depths of Romanticism, power, vigor, and rapture in this musician whose expression is usually limited to the manifestations of an essentially classical genius.”