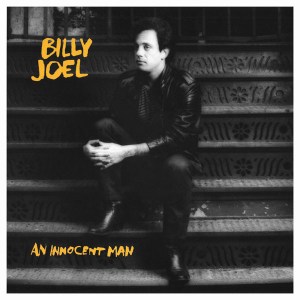 This was a monster in its day, generating a Number One hit and seven total single releases out of the ten songs that comprise it. Seven out of ten, not a bad track record. We couldn’t find a weak song on the album either, which is surely one of the reasons it sold seven million copies in the states alone.

What We’re Listening For on An Innocent Man

This copy has the kind of sound we look for in a top quality Billy Joel record. A few qualities to listen for:

… he’s effortlessly spinning out infectious, memorable melodies in a variety of styles, from the Four Seasons send-up “Uptown Girl” and the soulful “Tell Her About It” to a pair of doo wop tributes, “The Longest Time” and “Careless Talk.” Joel has rarely sounded so carefree either in performance or writing, possibly due to “Christie Lee” Brinkley, a supermodel who became his new love prior to An Innocent Man.

He can’t stop writing about her throughout the album — only three songs, including the haunted title track, aren’t about her in some form or fashion. That giddiness is infectious, helping make An Innocent Man an innocent delight that unwittingly closes Joel’s classic period.

In an interview about the making of the album, Joel talks about the fact that at the time that he was recording An Innocent Man, he was newly divorced from his first wife, Elizabeth Weber, and was single for the first time since achieving rock star status.

So he had the opportunity to date supermodels like Elle Macpherson and Christie Brinkley, and because of these experiences, he said, “I kind of felt like a teenager all over again.”And so he started writing songs in the same style as pop songs that he remembered from his teenage years, citing pop music from the late 1950s and early 1960s, including “early R&B songs and The Four Seasons, and the Motown music, soul music.”

Joel explained, “When you’re gonna write [songs for a new album], you write what you’re feeling. And I didn’t fight it. The material was coming so easily and so quickly, and I was having so much fun doing it. I was kind of reliving my youth. . .I think within 6 weeks I had written most of the material on the album.”