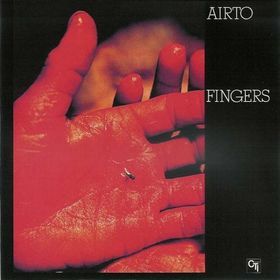 This is without a doubt the BEST ALBUM the man ever made. On top of that, this copy really has the kind of sound we look for, with an open, fully extended top end that gives all the elements of this complex music room to breathe.

The Highs Are Back

This copy has the highs that are missing from so many of the CTI originals. When you play this against most copies there is an extension to the top end that you don’t hear elsewhere. Since this album is heavy on percussion, that difference is critical. The HARMONICS of the percussion are critically important to the music. When they go missing it’s as if the music seems to slow down, a strange effect but a fairly common one with rhythmically dense arrangements such as these.

With an extended top end the sound is SWEET, not HARSH. Believe us when we tell you, the last thing you want is a harsh sounding pressing of a Rudy Van Gelder recording. (Not unless you have a dull, dull, deadly dull stereo. Those “Old School” stereos are practically the only way one can tolerate some of his early recordings.)

With so many high frequency transients and such complex arrangements, this is a record that must be mastered (and pressed) with great skill or the result is going to be trouble. RVG, who both recorded and mastered the album, has a penchant for over-cutting records and being heavy handed when it comes to his favorite studio tricks, often to the detriment of instrumental fidelity. When his approach works, the resulting recordings are wonderful. When he gets too carried away with his “sound,” look out.

We’ve been really digging this CTI jazz stuff for years. On the better albums such as this one, the players tend to sound carefree and loose — you can tell they’re having a heck of a time with the material. Don’t get me wrong — we still love the Blue Note and Contemporary label stuff for our more “hard core” jazz needs, but it’s a kick to hear top jazz musicians laying down these grooves and not taking themselves so seriously… especially when it sounds this good!

Some that we’ve put on the site are White Label Promos. I have a number of them and practically every stamper is represented for both sides, so the promo designation has almost no bearing on the quality of the sound.

Which is not saying much because it almost never does.

Airto was voted the number one percussionist in “Down Beat Magazine’s Critics Poll” for the years 1975 through 1982 and most recently in 1993.

This is the most problematical track on the entire album — please DO NOT JUDGE the album by this song! The sound is much better on the tracks that follow. This may have been an attempt to get that hot hit single sound for track one, the kind that would jump out of your radio speaker, but the effect can be a bit much, depending on how low distortion and high resolution your equipment is. The better your system, the less of a problem you will have getting this track to play well. If this track sounds decent, everything after it will really shine.

The biggest problem one typically runs into is a lack of bass and lower midrange. On the better copies the bass will be fine on the next track and those that follow.

The guitar work on this track is stellar, some of the best musicianship on the album. Credit must go to Rudy Van Gelder for making the guitar jump out of the mix. One of the things he can do, practically better than anyone, is make a lead instrument sound as big and as bold as you’ve ever heard it.

This track has a tendency to be overly compressed. Some stampers have so much added compression that the guitar and the percussion in the middle of the soundfield turn into undifferentiated muck. Those copies are what we refer to as “Not-So-Hot Stampers”.

Note that the sound on side two tends to be more open, rich and clear as a rule.

Perhaps my favorite track on the album; it builds into a chanting jam towards the end of its six minutes that grows to be as powerfully hypnotic as any I know. It’s the main reason this is a Desert Island Disc for me. I simply cannot get enough of Airto’s driving rhythms on this album. I’ve been playing this record my entire adult life and never once tired of it.

We wish Airto had made a string of albums as good as this one, but unfortunately we are not aware of any others of this quality. Which makes sense I suppose: one awe-inspiring masterpiece is more than most artists will ever produce.