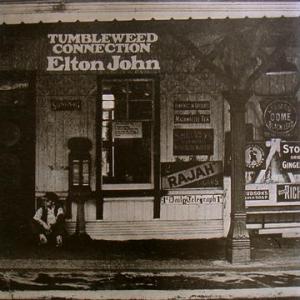 This original DJM Records British pressing has the kind of Tubey Magical Midrange that modern records can barely BEGIN to reproduce. Folks, that sound is gone and it sure isn’t showing signs of coming back. If you love hearing INTO a recording, actually being able to “see” the performers, and feeling as if you are sitting in the studio with the band, this is the record for you. It’s what vintage all analog recordings are known for — this sound.

By the way, if you have any doubts that Elton was a pop music genius, simply play this album a few dozen times. It’s all the proof you will need. Tumbleweed Connection and Honky Chateau are the two titles that are as close to perfect pop recordings as will ever exist in this world. 10 on a scale of 1 to 10.

What We’re Listening For on Tumbleweed Connection

A copy like this really tells you why we love this album so. The highs are silky sweet, the vocals are full-bodied and breathy, and the tonal balance is perfection from top to bottom. And big drums, monstrously big, can’t forget those.

Instead of repeating the formula that made Elton John a success, John and Bernie Taupin attempted their most ambitious record to date for the follow-up to their breakthrough. A loose concept album about the American West…

As should be expected for a concept album about the Wild West, the music draws from country and blues in equal measures, ranging from the bluesy choruses of “Ballad of a Well-Known Gun” and the modified country of “Country Comfort” to the gospel-inflected “Burn Down the Mission” and the rolling, soulful “Amoreena.” Paul Buckmaster manages to write dramatic but appropriate string arrangements that accentuate the cinematic feel of the album.