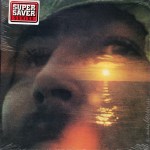 Reviews and Commentaries for the Music of David Crosby

[The bulk of this listing was written more than ten years ago and updated last year. Please to enjoy!]

{Also, whatever you do, don’t buy the Super Saver pressing of David Crosby’s debut you see pictured if you want to hear the album sound the way it should. Original only, and the right one of course.]

We ran across a website years ago that confirmed our worst prejudices regarding Audiophiles and their apparent desire to rely on gurus such as Harry Pearson to tell them which records sound good and which don’t.

This flies in the face of everything we stand for here at Better Records.

Picture yourself standing in your local record store with a record in your hands, one you happen to know is on the TAS List. This knowledge makes the record slightly more likely to sound better than any other record you might have randomly picked up in the store. Insignificantly, trivially more likely. In other words, as a practical matter, not all that much more likely.

Why is this? Three reasons:

But that’s not even the point. Ask yourself this:

Why on earth would anyone want to collect the records on The TAS List, when most of those records contain music that appeals to a very small group of people not named Harry Pearson?

The purpose of having an audiophile quality music system is that it allows you to hear your favorite music sound better than it would otherwise sound.

This is why we do our Hot Stamper shootouts for records nobody in his right mind would think of doing. Toto IV? Zuma? Toulouse Street? You’ve got to be kidding.

No, we’re not. We love those albums. We sincerely want to find great sounding copies of them for those of our customers who love them too. It’s as simple as that.

Nobody else on the planet seems capable (or interested) in doing the kind of work it takes to find superior pressings of these albums, so if we don’t do it, who will?

But I digress. The website we ran across is no longer active.

Had you gone there back in the day, the page you would have seen first is a list of Marty’s Audiophile Vinyl Collection, which he introduces this way:

I have been a reader of The Absolute Sound since issue 33, (1982) one of the great journeys of my life. (I still have those old issues.) I was always an avid follower of the “Super disc list” that Harry Pearson had put together, a “Holy scripture” that I followed in earnest. I have amassed many of those titles knowing full well that I would be rewarded by sonic treats they lay ahead.

Holy scripture? Sonic treats? I think I just threw up in my mouth.

What followed was the TAS List, in all its vainglory, with Marty’s links to the copies he has been “fortunate” enough to acquire.

Just for fun you might have wanted to click on the Rock & Pop section. Here you would have found some of the worst sounding audiophile pressings ever made.

This is some real garbage.

The more I browsed the more I had the feeling that my head was going to explode. Records like these positively disgust me. They pretend to be audiophile records, when in fact they universally sound phony and wrong. They fool audiophiles easily enough, that’s pretty clear, but any music lover would recognize their junky qualities in a heartbeat.

If you’ve been reading our commentaries over the years, you know how mercilessly we bash musically-empty “audiophile” pressings. When you own dead-as-a-doornail-sounding audio equipment (the kind most audiophile equipment dealers have been selling as long as I have been around) or play musically inert LPs like Dafos, you have no reason to come home and turn on your stereo. Where is the enjoyment? Where is the emotional satisfaction? How much fun can it be to play somebody else’s favorite records?

So imagine my joy, my positive glee when I came to another page, which said:

“Alas, it is true… I am selling my entire collection of records!”

(That Alas is priceless, no?)

If you want to collect Audiophile Bullshit records, go ahead. If you want records with amazing sound and the music you love, we have them.

It’s Not About Us

And, along the same lines, it’s not about what we think either. Our opinions are in no way central to the unique service we offer the discriminating record buying public. We offer, instead, the actual, physical, one-of-a-kind record or records that back up our opinions. That sound the way we describe them.

The records ultimately must speak for themselves. This is simply not possible with a list, no matter how accurate, discerning or comprehensive it may appear to be. Every record is unique. It sounds different from every other record ever made. A list of great sounding records tells you nothing more than that any given entry on the list has the potential for great sound.

Audiophiles who haven’t learned to listen for themselves, who worship at the clay feet of gurus like HP, will always need someone to tell them which records to buy. Eventually they will realize that this approach to records (and audio) doesn’t work, didn’t work, can’t work, and their collections will be put on the block, to ruin this hobby for the next audiophile too credulous or cloth-eared to notice how bad most of them sound.

As Always,
Your Humble Servant,