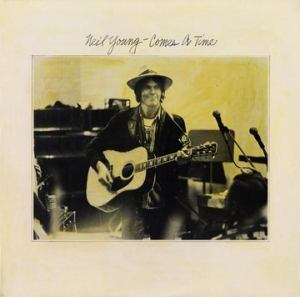 The All Music Guide is right on the money with their four and a half star assessment. We also wholeheartedly agree that this is the True Successor to Harvest, and would add that it’s the only Neil Young album to merit that distinction. To be blunt about it, Harvest Moon is no Comes a Time.

There’s one very special quality that this recording has that few of Neil’s others do: lovely female vocal harmonies. Nicolette Larson is all over this record, adding an extra layer of mellow magic to the proceedings. Maybe it’s the woman’s touch that makes this album so relaxed and heartfelt. Neil is completely and utterly in the zone here, so whatever put him in that special state of mind is fine by me. (To quote Mr. Young himself, A Man Needs a Maid.)

As for the music, all of side one is wonderful from start to finish; I wouldn’t change a note. Side two is not as strong musically, but in our experience, the sound can be every bit as good if you’ve got the right pressing.

But the right pressing is an elusive commodity. So many copies we played just sounded kind of flat, with dull guitars and hard vocals. Some made Neil sound like he was singing from the back of the studio. Still, others noticeably lacked leading-edge transients of any kind, blunting the attack of the various stringed instruments. Believe me, a Neil Young record with dull guitars is not worth playing, owning or writing about. You won’t find one on our site.

What We’re Listening For on Comes A Time

Goin’ Back
Comes a Time

If you hear an echo of Cripple Creek Ferry from After the Gold Rush in the lovely strings that form the backdrop for this one, you’re not alone. Since that’s one of our favorite tracks on ATGR, take it for the high praise it surely is. That sweet sensibility is what makes this entire side so special.

Look Out for My Love

So rich and warm. Does analog get much better than this?

Six and a half years later, Comes a Time finally was the Neil Young album for the millions of fans who had loved Harvest, an acoustic-based record with country overtones and romantic, autobiographical lyrics, and many of those fans returned to the fold, enough to make Comes a Time Young’s first Top Ten album since Harvest.

He signaled the album’s direction with the leadoff track, “Goin’ Back,” and its retrospective theme augmented with an orchestral backup and the deliberate beat familiar from his number one hit “Heart of Gold.” Of course, Young remained sly about this retrenchment. “I feel like goin’ back,” he sang, but added, “back where there’s nowhere to stay.”

Doubtless he had no intention of staying with this style, but for the length of the album, melodies, love lyrics, lush arrangements, and steel guitar solos dominated, and Young’s vocals were made more accessible by being paired with Nicolette Larson’s harmonies. Larson’s own version of Young’s “Lotta Love,” released shortly after the one heard here, became a Top Ten hit single.

Other highlights included the reflective “Already One,” which treats the unusual subject of the nature of a divorced family, the ironic “Field of Opportunity,” and a cover of Ian Tyson’s folk standard “Four Strong Winds” (a country Top Ten hit for Bobby Bare in 1965).