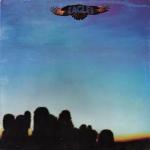 More of the Music of the Eagles

Let’s talk about the specifics of some of the tracks.

On most copies the vocals in the chorus will be a little bit strained. When you hear the vocals sound completely free from harmonic distortion or “edge” of any kind, you have yourself an exceptionally well-mastered, well-pressed copy.