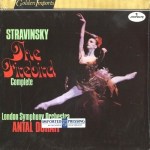 A lackluster reissue from Philips, bad enough to qualify for our Hall of Shame.

This is some truly dead as a doornail sound, sound which is not remotely competitive with the real Mercury pressings we’ve played. The FR pressings of the recording can be phenomenally good.  Even the later M2 pressings from Philips can be excellent.

Back in the ’80s and ’90s, I actually used to like some of the Golden Import pressings.  That was a long time go, and thankfully our playback system is quite a bit more revealing than the one I had back in those days.

After playing literally tens of thousands of records since then, my critical listening skills are better too.

Now when I play these imports, they sound veiled, overly smooth, smeary and compressed, not too different from the average Philips pressing, which of course is what they are. They’re all remastered by Philips, to give the Mercury tapes the sound that Philips thinks they should have. Sadly, not much of the Mercury Living Presence sound has survived.

We complain about mixing and mastering engineers who felt compelled to bring a new sound to old favorites.

The Philips label behind the Golden Import series are serial offenders in this regard.

The Golden Import pressings might be good for audiophiles who care more about quiet surfaces than good sound.  We are firmly staked at the opposite side of that trade-off. Quiet vinyl means nothing if the sound is poor, or, at the very least, wrong for this recording.

Our advice: Don’t waste your money.

This Record Is Good for Testing the Following Qualities: