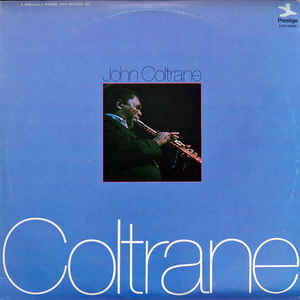 These vintage Prestige pressings have the kind of Tubey Magical Midrange that modern records can barely BEGIN to reproduce. Folks, that sound is gone and it sure isn’t showing signs of coming back. If you love hearing INTO a recording, actually being able to “see” the performers, and feeling as if you are sitting in the studio with the band, this is the record for you. It’s what vintage all analog recordings are known for — this sound.

This reissue is spacious, open, transparent, rich and sweet. It’s yet another remarkable disc from the Golden Age of Vacuum Tube Recording Technology, with the added benefit of mastering using the more modern cutting equipment of the ’70s. We are of course here referring to the good modern mastering of 40+ years ago, not the generally airless, opaque, veiled and compress mastering so common today.

We were impressed with the fact that these pressings excel in so many areas of reproduction. What was odd about it — odd to most audiophiles but not necessarily to us — was just how rich and Tubey Magical the reissue can be if you have the right pressing.

This leads me to think that most of the natural, full-bodied, lively, clear, rich sound of the recording was still on the tape decades later, and that all that was needed to get that vintage sound on to a record was simply to thread up the tape on the right machine and hit play. The fact that practically nobody seems to be able to make a record nowadays that sounds remotely this good tells me that I’m wrong to think that such an approach tends to work, if our experience with hundreds of mediocre Heavy Vinyl reissues is relevant.

What We’re Listening For on Coltrane

You Say You Care
Theme From Ernie
Russian Lullaby

For his second long player, John Coltrane (tenor saxophone) joined forces with his Prestige labelmate Red Garland (piano) to command a quartet through a five song outing supported by a rhythm section of Paul Chambers (bass) and Art Taylor (drums). The absence of any unessential instrumentalists encourages a decidedly concerted focus from Coltrane, who plays with equal measures of confidence and freedom.

The Coltrane original “Traneing In” is a rousing blues that exemplifies the musical singularity between Coltrane and Garland. Even though the pianist takes charge from the start, the structure of the arrangement permits the tenor to construct his solo seamlessly out of Garland’s while incrementally increasing in intensity, yet never losing the song’s underlying swinging bop. Chambers then gets in on the action with an effervescent run that quotes the seasonal favorite “Santa Claus Is Coming to Town.”

The poignant “Slow Dance” is a dark ballad with a simple, refined tune that is established by Coltrane. He turns things over to Chambers, and then Garland — whose respective style and grace are virtually indescribable — before bringing it home with one final verse. “Bass Blues” is the second Coltrane-penned selection on the album. Right from the tricky opening riff, the slightly asymmetrical melody showcases Chambers’ ability to mirror even the most intricate or seemingly improvised lines from Coltrane. The mid-tempo pace is a springboard for the tenor’s spontaneous inventions as he interfaces with a rollicking and ready Garland alongside Chambers’ unfettered bowing.

“You Leave Me Breathless” provides everything that a love song should with long, languid runs by Coltrane, Garland, and what is arguably Paul Chambers at his absolute finest. Few passages can match the grace and stately refinement of the bassist as he pilots the proceedings behind Taylor’s steady metronome and Garland’s luminous, effective comps. John Coltrane with the Red Garland Trio (1957) draws to a close on the bebop lover’s dream, a fast and furious interpretation of the Irving Berlin classic “Soft Lights and Sweet Music.” Clearly Coltrane excels within this context, laying down his note clusters more rapidly than the listener can actually absorb them.

These are clear demarcations pointing toward the remarkable sonic advancements Coltrane was espousing. And although it would be a few years before he’d make the leap into full-blown free jazz, the roots can clearly be traced back here.

In addition to being bandmates within Miles Davis’ mid-’50s quintet, John Coltrane (tenor sax) and Red Garland (piano) head up a session featuring members from a concurrent version of the Red Garland Trio: Paul Chambers (bass) and Art Taylor (drums).

This was the second date to feature the core of this band. A month earlier, several sides were cut that would end up on Coltrane’s Lush Life album. Soultrane offers a sampling of performance styles and settings from Coltrane and crew. As with a majority of his Prestige sessions, there is a breakneck-tempo bop cover (in this case an absolute reworking of Irving Berlin’s “Russian Lullaby”), a few smoldering ballads (such as “I Want to Talk About You” and “Theme for Ernie”), as well as a mid-tempo romp (“Good Bait”). Each of these sonic textures displays a different facet of not only the musical kinship between Coltrane and Garland but in the relationship that Coltrane has with the music.

The bop-heavy solos that inform “Good Bait,” as well as the “sheets of sound” technique that was named for the fury in Coltrane’s solos on the rendition of “Russian Lullaby” found here, contain the same intensity as the more languid and considerate phrasings displayed particularly well on “I Want to Talk About You.” As time will reveal, this sort of manic contrast would become a significant attribute of Coltrane’s unpredictable performance style.

Not indicative of the quality of this set is the observation that, because of the astounding Coltrane solo works that both precede and follow Soultrane — most notably Lush Life and Blue Train — the album has perhaps not been given the exclusive attention it so deserves.