Reviews and Commentaries for Can’t Buy a Thrill 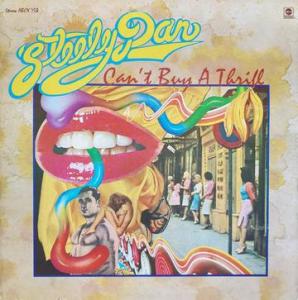 Dirty Work sounds great here — rich and sweet mids, breathy brass, and lots of texture to the vocals. Often this track sounds dull and dubby, but it’s actually just a case of the mix being smoother than most of the other songs on the album. If this track sounds smooth, and the other songs sound right, the tonality is correct for the whole side because that’s what the best copies sound like.

Flip the record over and the good times begin all over again. Elliot Randall’s guitar on Reeling In The Years has the meaty texture and uncanny presence to take the song to an entirely new level. Fire In The Hole is dynamic with real weight to the piano, and the double-tracked vocals on Turn That Heartbeat Over Again sound rich and poppy the way they should.

During a shootout, when we drop the needle on a copy and don’t hear that “Hot Stamper” sound, we toss that one and move on to the next. The difference between a truly Hot Stamper and most copies is so obvious that we rarely waste time on the pressings that clearly don’t have any real magic in their grooves.

Like we’ve said after some of our other Steely Dan Hot Stamper shootouts, you would never imagine how good this album can sound after playing the average copy, which is grainy, compressed and dead as the proverbial doornail. It’s positively criminal the way this well-recorded music sounds on the typical LP.

And how can you possibly be expected to appreciate the music when you can’t hear it right? The reason we audiophiles go through the trouble of owning and tweaking our temperamental equipment is we know how hard it is to appreciate good music which sounds bad. Bad sound is a barrier to understanding and enjoyment, to us audiophiles anyway.

What We’re Listening For on Can’t Buy A Thrill

Do It Again
Dirty Work
Kings
Midnight Cruiser
Only a Fool

Walter Becker and Donald Fagen were remarkable craftsmen from the start, as Steely Dan’s debut, Can’t Buy a Thrill, illustrates. Each song is tightly constructed, with interlocking chords and gracefully interwoven melodies, buoyed by clever, cryptic lyrics. All of these are hallmarks of Steely Dan’s signature sound, but what is most remarkable about the record is the way it differs from their later albums … Even so, the best moments (“Dirty Work,” “Kings,” “Midnight Cruiser,” “Turn That Heartbeat Over Again”) are wonderful pop songs that subvert traditional conventions and more than foreshadow the paths Steely Dan would later take.