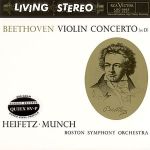 The Classic pressing of this album does not present the listener with the sound of a real, wood instrument bowed by horsehair in physical space

Big space, a solid bottom, and plenty of dynamic energy are strongly in evidence throughout. Practically zero smear, exceptional resolution, transparency, tremendous dynamics, a violin that is present and solid — this copy takes the sound of the recording right to the limits of what we thought possible.

In fact, side one of this very pressing was the one that allowed me to hear how good the 1959 recording with Heifetz could be. I marked it as a “ref copy” so that in preparing the shootout we would use this side one to dial in the VTA, knowing that the sound I had heard was tonally right on the money.

If we found one in the shootout with superior sonic qualities, so much the better — it happens all the time — but at least we knew we had one copy that really sounded right.

As it turned out this side one could not be beat. It easily bested all comers. As one would expect, the operating principle of regression toward the mean should cause side two of this copy to fall somewhat short of such an exceptional side one, and sure enough it did, although we had no way of knowing what record was on the turntable when grading it. Still, side two is awfully good, and dramatically better than most of what’s out there.

The texture and harmonic overtones of the strings are near perfection. Heifetz is a fiery player and on this pressing you will hear all the detail of his bowing without being overpowered by them. As we listened we became completely immersed in the music on the record, transfixed by the remarkable virtuosity he brings to such a difficult and demanding work.

Let’s face it: records from every era more often than not have some smear and we can never really know what accounts for it. The key thing is to be able to recognize it for what it is. (We find modern records, especially those pressed at RTI, to be quite smeary as a rule. They also tend to be congested, blurry, thick, veiled, and ambience-challenged. For some reason most audiophiles — and the reviewers who write for them — rarely seem to notice these shortcomings.)

Of course, if your system itself has tube smear — practically every tube system I have ever heard has some smear; it comes with the territory — it becomes harder to hear tube smear on your records. Our all-transistor rig has no trouble showing it to us.

Keep in mind that one thing live music never has is smear of any kind. Live music is smear-free. It can be harmonically distorted, hard, edgy, thin, fat, dark, and all the rest, but one thing it never is, is smeary. That is a shortcoming unique to the reproduction of music, and one for which many of the pressings we sell are downgraded.