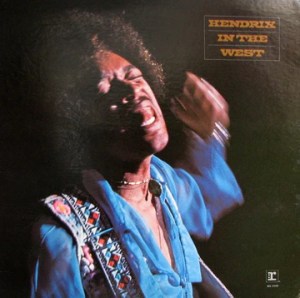 It’s hard to understand why this album isn’t more widely known. The performances are great and the sound is excellent for a vintage live recording.

Naturally not every copy sounds as good as this one. We heard a lot of pressings with too much grit and grain, and many that badly lacked presence. When I play a live album, I want to feel like I am there at the show (and to do that I set the volume accordingly, of course) but with most copies that just isn’t possible.

Thanks to Eddie Kramer’s amazing engineering, this album will have Jimi playing live in your listening room, and what a thrill it is to hear it all these years later (and on dramatically better equipment).

What We’re Listening For on Hendrix in the West

There were a lot of terrible album debacles in the wake of Jimi Hendrix’s death in 1970, but there were a handful of keepers. The Cry of Love and Rainbow Bridge were both excellent, but now the material from both albums has been officially released as part of First Rays of the New Rising Sun or on another compilation. Even the best material from the really bad albums like Midnight Lightning and War Heroes, has now been officially released without the egregious posthumous overdubs. But somehow, In the West, one of those keepers, remained basically out of print until 2011.

Yes, it’s a hodge-podge, made of live tracks largely from 1969 and 1970. But it’s a bunch of great live tracks, including some real rarities. The opening sequence of “God Save the Queen” and “Sgt. Pepper’s Lonely Hearts Club Band” is rare and excellent in itself, and Hendrix’s intro is hilarious (he was a truly funny guy). “Little Wing” and “I Don’t Live Today” (not on the original LP) were also live rarities for Hendrix, but not as rare as him covering “Blue Suede Shoes” or “Johnny B. Goode” (an absolutely blistering version that might top Chuck Berry’s). “Lover Man” was a live staple, but in this version, Hendrix slips in a quote from “Flight of the Bumble Bee,” and listen for a quote from “Tomorrow Never Knows” in “I Don’t Live Today.” Fans familiar with the original vinyl should note some differences. The versions of “Voodoo Child (Slight Return)” and “Little Wing” (recorded at Royal Albert Hall) have recently been released elsewhere, so they’ve been replaced with versions from San Diego 1969 and Winterland 1968 (oddly enough, this very same version of “Little Wing” was also released on the Winterland box set the same day). In addition, to “I Don’t Live Today,” “Fire,” and “Spanish Castle Magic” are added as bonus tracks, also from the San Diego show.

Old vinyl fetishists may quibble that the tracks have been resequenced, but most listeners will have no idea. In the West is a great sampling of Hendrix’s late-period live material (and his sense of humor) making its long awaited appearance in the digital world.