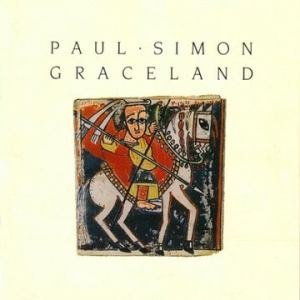 Both sides here have more weight down low and more presence to Simon’s vocals. There’s a pleasant smoothness here, standing in sharp contrast to the typically grainy, spitty copy.

Super transparent and hi-res with no attendant sacrifice in the low end or fullness, this is about as tonally balanced as Graceland gets.

We listen to piles of pressings of Graceland regularly. We know the range of sound on the album, what constitutes good, better and best, and we know precisely what qualities the premier copy must have in order to win one of our shootouts.

Above all the thing Graceland has going for it sonically is CLARITY. It has many other good qualities as well: It can be open and spacious, tonally correct, with punchy, tight bass and present, breathy vocals.

The better copies have all these qualities to some degree, but the one quality a good copy must-have is clarity because that’s what’s especially good about the sound of the record.

Without clarity, the music doesn’t work. The shortest definition of a Hot Stamper is that it’s the pressing where the music works. You can be sure that any Hot Stamper copy on our site has at least that going for it.

The biggest problem with the sound of Graceland that we encounter in our shootouts is GRAIN. If you’ve got a copy lying around, throw it on and listen closely to the vocals. Odds are that you’ll hear more grain than texture, and that’s not the most pleasing way to hear this music.

Other big issues were lack of energy, an overall dark quality, thickness, and congestion. We had to play a bunch of copies to find those that were both smooth and involving, but it was worth the trouble when we heard how correct and musical the best pressings sounded.

What We’re Listening For on Graceland

Below is our review of the Heavy Vinyl pressing, a textbook case of remastering equalization gone mad.

You Can Call Me Al
Under African Skies
Homeless
Crazy Love, Vol. II
That Was Your Mother
All Around The World or the Myth of Fingerprints

With Graceland, Paul Simon hit on the idea of combining his always perceptive songwriting with the little-heard mbaqanga music of South Africa, creating a fascinating hybrid that re-enchanted his old audience and earned him a new one. It is true that the South African angle (including its controversial aspect during the apartheid days) was a powerful marketing tool and that the catchy music succeeded in presenting listeners with that magical combination: something they’d never heard before that nevertheless sounded familiar.

As eclectic as any record Simon had made, it also delved into zydeco and conjunto-flavored rock & roll while marking a surprising new lyrical approach (presaged on some songs on Hearts and Bones); for the most part, Simon abandoned a linear, narrative approach to his words, instead drawing highly poetic (“Diamonds on the Soles of Her Shoes”), abstract (“The Boy in the Bubble”), and satiric (“I Know What I Know”) portraits of modern life, often charged by striking images and turns of phrase torn from the headlines or overheard in contemporary speech.

An enormously successful record, Graceland became the standard against which subsequent musical experiments by major artists were measured.