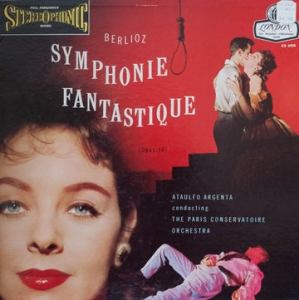 This original London pressing has the kind of Tubey Magical Midrange that modern records can barely BEGIN to reproduce. Folks, that sound is gone and it sure isn’t showing signs of coming back. If you love hearing INTO a recording, actually being able to “see” the performers, and feeling as if you are sitting in the studio with the band, this is the record for you. It’s what vintage all analog recordings are known for —this sound.

What We’re Listening For on Symphonie Fantastique

It took a long time to get to the point where we could clean the record properly, twenty years or so, and about the same amount of time to get the stereo to the level it needed to be, involving, you guessed it, many of the Revolutionary Changes in Audio we tout so obsessively.

As we’ve said before, these kinds of recordings – Ambrosia; Blood, Sweat and Tears; The Yes Album; Dark Side of the Moon, Led Zeppelin II – they are designed to bring an audio system to its knees.

Symphonie fantastique: Épisode de la vie d’un artiste … en cinq parties (Fantastical Symphony: Episode in the Life of an Artist … in Five Sections) Op. 14, is a program symphony written by the French composer Hector Berlioz in 1830. It is an important piece of the early Romantic period. The first performance was at the Paris Conservatoire on 5 December 1830. Franz Liszt made a piano transcription of the symphony in 1833 (S. 470).

Leonard Bernstein described the symphony as the first musical expedition into psychedelia because of its hallucinatory and dream-like nature, and because history suggests Berlioz composed at least a portion of it under the influence of opium. According to Bernstein, “Berlioz tells it like it is. You take a trip, you wind up screaming at your own funeral.”

In 1831 Berlioz wrote a lesser-known sequel to the work, Lélio, for actor, soloists, chorus, piano and orchestra.