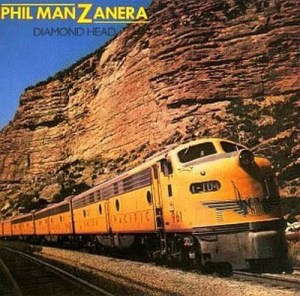 The wind is at your back here because this is one seriously well-recorded album. If this copy doesn’t wake up your stereo, nothing will.

Like its brother, 801 Live, this album is an amazing sonic blockbuster, with sound that positively leaps out of the speakers. Why shouldn’t it? It was engineered by the superbly talented Rhett Davies at Island, the genius behind Taking Tiger Mountain, the aforementioned 801 Live, Avalon, Dire Straits’ first album and many many more.

If we could regularly find copies of this Audiophile Blockbuster (and frankly if more people appreciated the album) it would definitely go on our Top 100 Rock and Pop List. In fact, it would easily make the Top Twenty from that list, it’s that good.

Looking for Tubey Magic? Rhett Davies is your man. Just think about the sound of the first Dire Straits album or Avalon. The best pressings of those albums — those with truly Hot Stampers — are swimming in it.

This isn’t known as an audiophile album but it should be — the sound is GLORIOUS — wall to wall, floor to ceiling, and as rich and dynamic as it gets. It’s also a big speaker album. Play this one as loud as you can. (801 Live is exactly the same way and needs high volumes to come to life.)

This album basically became the set list for 801 Live, the concert collaboration between Eno, Manzanera and their fellow travelers. That album is one of my all-time favorites too, and a Must Own for anyone who likes British Art Rock from the ’70s.

What both of these albums share is amazing guitar work. Manzanera was the guitarist for Roxy Music, and this album can be enjoyed simply as an exercise in hearing every possible kind of sound the guitar can make. It also helps to have Eno doing electronic treatments for the instrument and coming up with a whole new sound.

One listen to a song like Diamond Head is all it should take to make you a fan. If that song doesn’t do it for you, the rest of the album won’t either, but I can’t imagine how that could be.

What We’re Listening For on Diamond Head

Check ‘Em All Off

Looking at our Hot Stamper checklist, it occurs to me that the best copies of this album excel in every area. It’s energetic, dynamic, the sound just jumps out of the speakers, there’s tons of bass, it’s smooth — in short, it’s doing it all!

Domestic pressings suck. German pressings too. Don’t waste your money. We’ve never heard a good one. (And most of the British pressings you can find won’t hold a candle to this one.)

A Must Own Art Rock Record (If That’s Your Thing)

Phil Manzanera’s first post-Roxy foray into solo albums is a terrific all-star affair that still holds up enormously well. Calling on favors from Roxy members present and past, and those from the Cambridge/British art rock scene, Manzanera assembled a supergroup for every song.

Robert Wyatt sings Spanish gibberish on the opener “Frontera,” a rewrite of his own “Team Spirit.” Brian Eno teams up for the sunny “Big Day” and the nonsensical “Miss Shapiro,” both of which would not have been out of place on his own early solo albums. John Wetton (of several groups including Family and Asia) sings a duet with Doreen Chanter (of the Chanter Sisters and the Joe Cocker Band), and Bill MacCormick of Matching Mole and Quiet Sun sings his own “Alma,” the album’s closing ballad.

Fans of any of the singers above, not to mention Manzanera, whose party this is, won’t be disappointed. A majority of these tracks went on to form the set list for 801 Live.