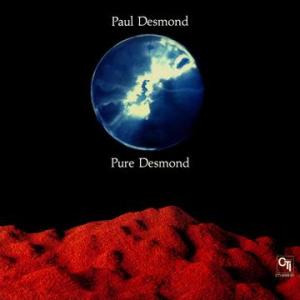 It’s a lovely album, but if your pressing doesn’t have all the magic we could forgive you for not giving the music the credit it deserves. Unless your copy has a lot of energy and good amounts of richness and fullness, you probably wouldn’t give the music a second thought.

When you hear a copy like this, it’s an entirely different story. Fans of Contemporary label jazz are sure to get a lot out of this one.

What We’re Listening For on Pure Desmond

Squeeze Me
I’m Old Fashioned
Nuages
Why Shouldn’t I

With the Skylark “experiment” behind him, Paul Desmond reverted back to the relaxed quartet format that suited him well in the past. The reason? Through Jim Hall, he found a little-known, splendid guitarist in Toronto named Ed Bickert who became his new gigmate in 1974, and this album was meant to show his discovery off. In fact, it sparked a Desmond renaissance where he regained a good deal of the witty spark and erudite cool of his collaborations with Hall, no matter how unfashionable it was to play this way in 1974.

Bickert is an even more reticent player than Hall, softer in touch and temperament, but eminently musical, enough to fire up Desmond’s creativity. Old Desmond hand Connie Kay lends sympathy and comfort on drums, and Ron Carter is on bass. “Just Squeeze Me,” “Everything I Love,” and “Til the Clouds Roll By” are the best examples of the empathy at work here but any track will do.