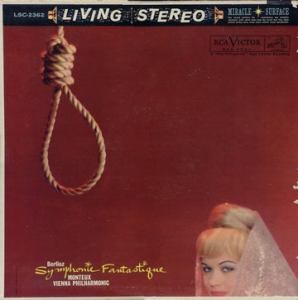 One of our favorite performances of Berlioz’s masterwork returns to the site in spectacular fashion, with stunning 1960 Living Stereo sound on both sides.

This is a piece that’s difficult to squeeze onto two sides of a single LP, clocking in as it does at around 45 minutes, which means that the mastering engineer has three options when cutting the record: compress the dynamics, lower the level, or filter out the deep bass.

The RCA mastering engineer for this pressing managed to hold on to the powerful dynamics captured by the Decca (as far as I know) recording team, seemingly without doing harm to dynamics, levels or deep bass. How, I have no idea.

Maybe it’s the gorgeous Living Stereo strings and hall acoustics that let us forget about the possibility of compromises in other areas.

(Of course this was always the downfall of the Classic Records RCA remasterings. Their records had bass and dynamics, no one could deny it, but the strings were usually shrill  and smeary, and the hall practically non-existent. We found out just years ago that there was a new series of recuts coming from Acoustic Sounds. Based on their dismal track record I will be very surprised if they are much better than mediocre.)

What We’re Listening For on Symphonie Fantastique

What do we love about these Living Stereo Hot Stamper pressings? The timbre of every instrument is Hi-Fi in the best sense of the word. The instruments on this pressing are reproduced with remarkable fidelity.

Now that’s what we at Better Records mean by “Hi-Fi”, not the kind of Audiophile Phony BS Sound that passes for Hi-Fidelity these days.

The microphones are not fifty feet away from the musicians (Water Lily) nor are they inches away (Three Blind Mice).

It took a long time to get to the point where we could clean the record properly, twenty years or so, and about the same amount of time to get the stereo to the level it needed to be, involving, you guessed it, many of the Revolutionary Changes in Audio we tout so obsessively.

As we’ve said before, these kinds of recordings – Ambrosia; Blood, Sweat and Tears; The Yes Album; Dark Side of the Moon, Led Zeppelin II – they are designed to bring an audio system to its knees.

Reveries; Passions
A Ball
Scenes in the Country (Pt. 1)

Scene in the Country (Concl.)
March to the Scaffold
Dream of a Witches’ Sabbath

Symphonie fantastique is an epic for a huge orchestra. Through its movements, it tells the story of an artist’s self-destructive passion for a beautiful woman. The symphony describes his obsession and dreams, tantrums and moments of tenderness, and visions of suicide and murder, ecstasy and despair.

The story is a self-portrait of its composer, Hector Berlioz.

Hector Berlioz was born in 1803 in La Cote St André, a small town near the French Alps. His mother was a devout Catholic and his father a noted doctor. At twelve, Berlioz discovered music. He became an accomplished flautist, picked up the guitar and then taught himself to play drums.

As a teen, Berlioz suffered from isolation and bouts of uncontrollable mood swings. These dramas, coupled with his fantasies of love and loss, provided Berlioz with the raw materials for his life’s work.

Berlioz left home for Paris to study medicine, but soon turned his attention to music. His father allowed him time to prove himself in this new endeavor but his mother considered theatrical ambitions sinful and disowned him.

In 1828, Paris buzzed with two sensations, Beethoven and Shakespeare.

Beethoven’s music established the Romantic ideal; instead of fitting suitable music into classical forms, Beethoven reconfigured the symphony and the personnel of the orchestra to accommodate his emotional expression. Berlioz couldn’t get enough of it.

Shakespeare, as presented by the Irish actress, Harriet Smithson, changed Berlioz’s life forever. From the moment he saw her, he was obsessed. Symphonie fantastique is nothing less than Berlioz’s extravagant attempt to attract Harriet’s attention.

The piece begins by introducing the listener to the vulnerable side of the protagonist, the Artist. The object of the Artist’s love is represented by an elusive theme called the “idée fixe” – the object of fixation. Violins and flute float flirtatiously through the charming melody. The noise of the rest of the orchestra represents the Artist’s frustration and despair. Frightening outbursts alternate with moments of the greatest tenderness. It all leads to a moment of complete frenzy and collapse.

Symphonie fantastique premiered in Paris in 1830. Reactions were mixed. Most disappointingly, Harriet Smithson did not attend.

The second movement invites us to a ball. Two harps lead the waltz as the music alternates between watching the dancers and spying on the Artist trying to gain the attention of his beloved.

After the disappointment of the premiere, Berlioz decided to compete for the prestigious Prix de Rome. For the competition, entrants were given a melody and had to write a fugue (a form with very strict rules) on the spot. It took Berlioz four years to master the devilish form but at last he won. The Prix de Rome earned Berlioz the national recognition he craved plus a subsidy to study for two years in Rome.

Scenes in the Fields

While in Italy, Berlioz explored the musical landscape of the countryside and continued to polish Symphonie fantastique.

The Third Movement of Symphonie fantastique opens with an echo from Berlioz’s childhood: the sound of a cowherd’s melody. Berlioz uses the huge orchestra to create the sense of suspension of time that intimacy can bring.