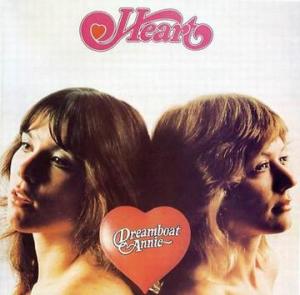 Not many records have this kind of big, rockin’ sound, that’s for sure! Punchy and present, open and transparent, with real weight and power to the low end. If you’re an audiophile who loves classic rock, you just haven’t lived until you’ve heard side one of this album on a Hot Stamper pressing.

We’re pretty fond of these ladies here at Better Records. Their second album, Little Queen, has been a favorite test disc around here for years. When Heart is at their best, the music is wonderful. If you’re lucky enough to own the right pressing, this band can ROCK with the best of them.

What A Hot Copy Gets You

For one thing, the music just JUMPS out of the speakers. There is so much more LIFE to this recording than I ever thought possible, and only the best pressings let that energy come through. In a nutshell, those are the ones that earn the name Hot Stamper.

This is a true Demo Disc in the world of rock records. It’s also one of those recordings that demands to be played LOUD. If you’ve got the big room, big speakers, and the power to drive them, you can have a live rock and roll concert in your very own house! When the boys behind Heart (superb musicians all) let loose with some of those Zep-like monster power chords — which incidentally do get good and loud in the mix, unlike most rock records which suffer from compression and “safe” mixes — I like to say that there is no stereo system on the planet that can play loud enough for me. (Horns maybe, but I don’t like the sound of horns, so there you go.)

What We’re Listening For on Dreamboat Annie

For Big Production Rock Albums such as this there are some obvious problem areas that are often heard on at least one or two sides of practically any copy of this album.

Transparency, clarity and presence are key. Note that none of the British copies we played was thin and anemic. (The domestic copies are made from dubs and can’t begin to compete.) Almost all had plenty of Tubey Magic and bottom end, so thankfully that was almost never a problem. They did however tend to lack top-end extension and transparency, and many were overly compressed.

We consider Heart’s debut their Masterpiece. We love side one of Little Queen, but for overall consistency you have to give the tallest trophy to Dreamboat Album.

In the 1980s and ’90s, numerous women recorded blistering rock, but things were quite different in 1976 — when female singers tended to be pigeonholed as soft rockers and singer/songwriters and were encouraged to take after Carly Simon, Melissa Manchester, or Joni Mitchell rather than Led Zeppelin or Black Sabbath.

Greatly influenced by Zep, Heart did its part to help open doors for ladies of loudness with the excellent Dreamboat Annie. Aggressive yet melodic rockers like “Sing Child,” “White Lightning & Wine,” and the rock radio staples “Magic Man” and “Crazy on You” led to the tag “the female Led Zeppelin.” And in fact, Robert Plant did have a strong influence on Ann Wilson. But those numbers and caressing, folk-ish ballads like “How Deep It Goes” and the title song also make it clear that Nancy and Ann Wilson had their own identity and vision early on.