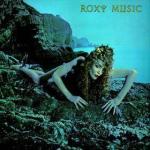 Siren is one of our favorite Roxy albums, right up there with the first album and well ahead of the commercially appealing Avalon. After reading a rave review in Rolling Stone of the album back in 1975, I took the plunge, bought a copy at my local Tower Records and instantly fell in love with it.

As is my wont, I then proceeded to work my way through their earlier catalog, which was quite an adventure. It takes scores of plays to understand where the band is coming from on the early albums and what it is they’re trying to do. Now I listen to each of the first five releases on a regular basis.

Somehow they never seem to get old, even after more than forty years.

Of all the Roxy albums (with the exception of Avalon) this is probably the best way “in” to the band’s music. The earlier albums are more raucous, the later ones more rhythmically driven — Siren catches them at their peak, with, as other reviewers have noted, all good songs and no bad ones.

The British and German copies of Siren are clearly made from dub tapes and sound smeary, small and lifeless.

To be fair, Siren has never impressed us as an exceptionally good sounding recording. Like other middle period Roxy, records such as Country Life and Manifesto (the albums just before and after), it simply does not have Demo Disc analog sound the way Avalon, Stranded or the Self-Titled albums do (the latter two clearly being the best sounding in their catalog).

One would be tempted to assume that the import pressings of Siren would be better sounding, the way the imports of the first four Roxy albums are clearly better sounding. (There has never been a domestic Hot Stamper pressing of any of those titles and, since we never buy them or play them, there probably never will be.)

Love Is the Drug
End of the Line
Sentimental
Whirlwind

She Sells
Could It Happen to Me?
Both Ends Burning
Nightingale
Just Another High

Abandoning the intoxicating blend of art rock and glam-pop that distinguished Stranded and Country Life, Roxy Music concentrates on Bryan Ferry’s suave, charming crooner persona for the elegantly modern Siren. As the disco-fied opener “Love Is the Drug” makes clear, Roxy embraces dance and unabashed pop on Siren, weaving them into their sleek, arty sound.

It does come at the expense of their artier inclinations, which is part of what distinguished Roxy, but the end result is captivating. Lacking the consistently amazing songs of its predecessor, Siren has a thematic consistency that works in its favor, and helps elevate its best songs — “Sentimental Fool,” “Both Ends Burning,” “Just Another High” — as well as the album itself into the realm of classics.

It’s a superb album, striking the listener immediately with a force and invention reserved only for the most special musical experiences. The overall sound, while never lacking the essential characteristics one associates with Roxy, is less dense and ornate than much of its predecessor. There’s a crispness and vitality in Chris Thomas’ production which is reminiscent of the sense of adventure and cavalier spirit which marked their early recordings, an impetuosity which has lately been absent from their work.

Successive Rolling Stone Record Guides have given it five-star reviews.

The 1983 edition states: “Siren’s title is appropriate; it has that sort of effect on the listener. It is Roxy’s masterpiece, calling the listener back by virtue of its finely honed instrumental attack and compelling lyrical attitude. “Love is the Drug,” Roxy’s nearest approximation to an American hit single, set the scene of transitory love in a plastic world, while “She Sells” and “Sentimental Fool” pictured the participants in the charade as simultaneously pathetic and heroic”.

The 1992 edition says “On Siren Roxy perfects its suave attack”. In the fourth edition “Siren is smoother; it’s the first Roxy Music album without any failed moments.”