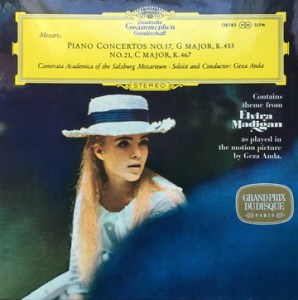 The piano is beautifully recorded as well. Geza Anda’s performance is hard to fault here. You will have a very hard time finding better recordings of these Mozart piano concertos, of that we have no doubt.

What We’re Listening For on Mozart’s Piano Concertos

These wonderful concertos — two of the greatest ever composed — should be part of any serious Classical Collection.

Others recordings that belong in that category can be found here.

The C Major Concerto gives absolutely no sign of being composed in an atmosphere of “rush and bustle”; neither could the contrast with the stormy drama of its immediate predecessor be greater. The first movement, an expansive Allegro of Olympian grandeur and design is followed by an Andante of sublime beauty made famous in more recent times by its use in the film Elvira Madigan.

This movement, with its few notes and bare outline, is incidentally a classic example of the manner in which Mozart frequently left himself room to improvise within the context of his own concertos, a technique lately reintroduced by performers such as Malcolm Bilson and Robert Levin. The final movement is an Allegro vivace assai, its evocation of the world of opera buffo typical of many of Mozart’s finales, both in concerto and symphony. Like the D Minor Concerto, K. 467 is scored for a large orchestra: flute, pairs of oboes, bassoons, horns and trumpets, timpani and strings.