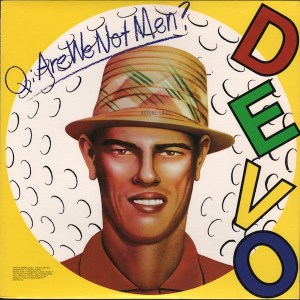 While Devo’s music may never sound as rich, warm, and tubey as the typical classic rock album, that certainly doesn’t mean we need to accept completely anemic, sterile sound for this album. It took a big stack of copies, but here’s one that made us sit up straight, pay attention and enjoy!

Tons of great songs here, including Uncontrollable Urge, Jocko Homo, Too Much Paranoias, and their killer cover of The Stones’ Satisfaction.

What the best sides of Q: Are We Not Men? A: We Are Devo! have to offer is not hard to hear:

What We’re Listening For on Q: Are We Not Men? A: We Are Devo!

Produced by Brian Eno, Q: Are We Not Men? A: We Are Devo! was a seminal touchstone in the development of American new wave. It was one of the first pop albums to use synthesizers as an important textural element, and although they mostly play a supporting role in this guitar-driven set, the innovation began to lay the groundwork for the synth-pop explosion that would follow very shortly.

Q: Are We Not Men also revived the absurdist social satire of the Mothers of Invention, claiming punk rock’s outsider alienation as a home for freaks and geeks. While Devo’s appeal was certainly broader, their sound was tailored well enough to that sensibility that it still resonates with a rabid cult following. It isn’t just the dadaist pseudo-intellectual theories, or the critique of the American mindset as unthinkingly, submissively conformist. It was the way their music reflected that view, crafted to be as mechanical and robotic as their targets.

Yet Devo hardly sounded like a machine that ran smoothly. There was an almost unbearable tension in the speed of their jerky, jumpy rhythms, outstripping Talking Heads, XTC, and other similarly nervy new wavers. And thanks to all the dissonant, angular melodies, odd-numbered time signatures, and yelping, sing-song vocals, the tension never finds release, which is key to the album’s impact. It also doesn’t hurt that this is arguably Devo’s strongest set of material, though several brilliant peaks can overshadow the remainder. Of those peaks, the most definitive are the de-evolution manifesto “Jocko Homo” (one of the extremely few rock anthems written in 7/8 time) and a wicked deconstruction of “(I Can’t Get No) Satisfaction,” which reworks the original’s alienation into a spastic freak-out that’s nearly unrecognizable.

But Q: Are We Not Men? also had a conceptual unity that bolstered the consistent songwriting, making it an essential document of one of new wave’s most influential bands.