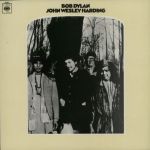 So many great records in this batch, but some solid misses too — details coming. John Wesley Harding for example sounds great but has some serious distortion through much of side two; a bit ’too vintage’, in spite of the sound it seems once to have had.

Definitely check your front end set-up on this one, there is no actual distortion on the record, just sound that may be hard to reproduce. Make sure you have a recently replaced cartridge for one. Carts that get old have a problem with records like these. We know, we replace our cartridge every three months when hard to play records start straining or getting congested or gritty. The sheen of massed strings, a sound critical to the better orchestral recordings we play, are impossible to reproduce correctly with an older-than-it-should-be unit. A fresh cartridge can make all the difference in the sound of  difficult to reproduce records.

Keeping a cart too long is a mistake 100% of the audiophiles I have known in my life make, so I assume lots of other audiophiles do too.

The other explanation could be that our microfine tip is playing deeper in the groove and missing whatever damage is encoded above it, damage which may have been caused by the older cartridges of the day that were used to play the record by the previous owner or owners. We can’t say it doesn’t happen.

We can say that if you bring this record back, the next person to buy it has a roughly 98% chance of keeping it. Maybe one out of five hundred or so ever come back a second time. At least that’s how it has worked out over the last twenty years.