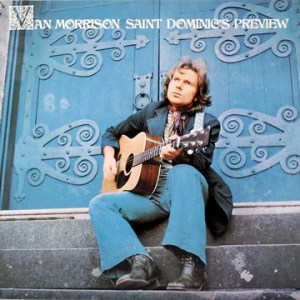 We’ve been huge fans of this album for ages and don’t understand why it doesn’t get more respect. This is the album that comes right after Tupelo Honey and His Band And The Street Choir, so that should tell you something.

The piano has real weight, the bottom end is solid, and the brass sounds lively and rich, never squawky.

This vintage Green Label early pressing has the kind of Tubey Magical Midrange that modern records rarely begin to reproduce. Folks, that sound is gone and it sure isn’t showing any sign of coming back.

Hot Stamper sound is rarely about the details of a given recording. In the case of this album, more than anything else a Hot Stamper must succeed at recreating a solid, palpable, real Van Morrison singing live in your listening room. The better copies have an uncanny way of doing just that.

Credit Donn Landee (and producer Ted Templeman as well) with the full-bodied, rich, smooth, oh-so-analog sound of the better copies. Landee recorded many of our favorite albums here at Better Records.

What We’re Listening For on Saint Dominic’s Preview

The album was recorded during late winter and spring in 1971/72 at Wally Heider Studios and Pacific High Studios in San Francisco and at the Church in San Anselmo. The fourth track on the album, “Listen to the Lion” was recorded during the Tupelo Honey sessions in 1971 at Columbia Studios in San Francisco. Ted Templeman was co-producer on the album.

Several of the musicians who played on the album were newly recruited: Jules Broussard, saxophonist and previously from Boz Scaggs, pianist Mark Naftalin who had previously played with the Paul Butterfield Blues Band, guitarist Ron Elliott from the Beau Brummels and Bernie Krause played the Moog synthesizer.

Unlike his two previous albums, Morrison spoke well of this one when interviewed by biographer Ritchie Yorke: “The album was kind of rushed because of studio time and things like that. But I thought it was a good shot, that album. There were a lot of good songs on it. St. Dominic’s Preview was more into where I’m at, more into what I was doing.”

Erik Hage wrote that “it is one of the strongest albums in the Van Morrison canon because it seems to adapt and incorporate all of the lessons and discoveries of the rich period of evolution that came before it while still opening up new windows.” Miles Palmer writing in The Times commented that “The cumulative impact is devastating.”

In Rolling Stone, Stephen Holden wrote that “The coexistence of two styles on the same record turns out to be very refreshing; they complement each other by underscoring the remarkable versatility of Van’s musical imagination.” He also declared it “the best-produced, most ambitious Van Morrison record yet released.”

Robert Christgau ends his A- rated review with: “The point being that words—which on this album are as uneven as the tunes—sometimes say less than voices. Amen.”

The album was originally planned to be titled Green but it was changed after Morrison wrote the song “Saint Dominic’s Preview” and used it as the title song. A Rolling Stone profile of Morrison in June 1972 quoted him as saying that the song had evolved from a dream about a St. Dominic’s church gathering where a mass for peace in Northern Ireland was being held. Rolling Stone then commented that later while Morrison was in Nevada he read in a newspaper article that a mass was being held the next day for peace at a St. Dominic’s church in San Francisco.

It was his first album not to have love as its central theme and significantly (as his marriage was deteriorating). The cover shows Morrison sitting on church steps playing guitar with ripped trousers and scruffy boots looking like a gypsy troubadour out on the street.