Reviews and Commentaries for Please Please Me 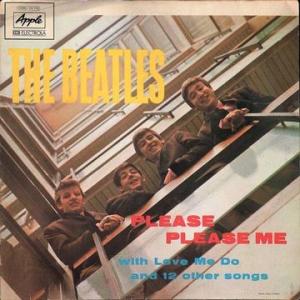 Folks, if you’re looking for an amazing Top Quality copy of the first Beatles release, here it is! Big and lively with superb presence and energy, this is EXACTLY the right sound for this music. The album itself is nothing short of amazing. It captures more of the live sound of these four guys playing together as a rock and roll band than any record they ever made afterwards. (Let It Be gets some of that live quality too and makes a great bookend for the group.)

This vintage Beatles pressing has the kind of Tubey Magical Midrange that modern records rarely even BEGIN to reproduce. Folks, that sound is gone and it sure isn’t showing signs of coming back. If you love hearing INTO a recording, actually being able to “see” the performers, and feeling as if you are sitting in the studio with the band, this is the record for you. It’s what vintage all analog recordings are known for — this sound.

There’s a subtle smearing and masking that occurs on most pressings. You don’t notice it often because you have no better pressing to compare yours to. But when you have many copies of the same pressing, and you are lucky enough to discover a Hot One lurking among them, you can hear instantly how much better defined all the instruments and voices are. You hear the ambience and presence that’s veiled on other LPs. Dynamic contrasts increase.

It all starts to sound right, so right in fact that you forget it’s a record and you find yourself just enjoying the music. Disbelief has been suspended.

On the top copies like this one the presence of the vocals and guitars is so real it’s positively startling at times. What started out as a great Beatles recording had turned into a great Beatles album. Now it’s a piece of music as opposed to a piece of plastic.

Just play Baby It’s You to hear what we’re talking about. When the boys all say “Oooooh,” you can pick out WHO is saying it and HOW they’re saying it.

Anna (Go To Him) is another stunner. It’s Tubey Magical with amazing immediacy and presence. The voices are PERFECTION — smooth, sweet, rich, full and breathy. The overall sound is lively and energetic with a meaty bottom end — in other words, it really rocks!

What We’re Listening For on Please Please Me

Please Please Me Hot Stampers are a regular feature on our site. We’ve been telling anyone who will listen for YEARS that The Beatles in their early days were exceptionally well-recorded, but only the right pressing will prove that.

And the odd thing — not so odd to us anymore but odd to most record collectors I would guess — is that many of the hot copies have exactly the same stampers as the less than hot copies. It’s a mystery, and the only way to solve such a mystery is… to play the record. That’s what we do around here all day, and what we heard on this copy was musically involving Hot Stamper sound.

Whether or not you think the Beatles are the best rock band of all time, it’s hard to deny they’re the best rock story. Their narrative arc– of graft, tragedy, and stardom; of genius emerging and fragmenting– is irresistible. More so when you factor in the sense that they drove their fascinating times as much as mirrored them.

But the satisfying sweep of the Beatles’ epic risks doing them a disservice. It makes their achievements and development feel somehow predestined, an inevitable consequence of their astonishing talent. Of course, this isn’t the case: Every record they made was born out of a new set of challenges and built around tough decisions. The marketing of the band over the past few decades by their record label, Apple, has been aimed at creating a sense of apart-ness: Let lesser talents digitize their songs, feature on compilations, sell their music to samplers. The Beatles are different. This flatters listeners who were there, but setting the band apart from the rest of the pop world risks sterilizing their music and making newcomers as resentful as curious.

Besides, at the start they weren’t so different at all. Britain in the early 1960s swarmed with rock’n’roll bands, creating local scenes like the Mersey Sound the Beatles dominated. Rock’n’roll hadn’t died out, but it had become unfashionable in showbiz eyes– a small-club dance music that thrived on local passion. It was raucous, even charming in a quaint way, but there was no money in it for the big-timers of the London music biz.

At the same time the record market was booming. The Conservative UK government of the late 1950s had deliberately stoked a consumer boom: Aping the post-war consumption of the U.S., more British households than ever owned TVs, washing machines, and record players. The number of singles sold in Britain increased eightfold between the emergence of Elvis in 1956 and the Beatles in ’63. Combine this massively increased potential audience with the local popularity of rock’n’roll and some kind of crossover success seems inevitable– the idiocy of the Decca label in turning down the Beatles isn’t so much a businessman’s failure to recognize genius as a businessman’s failure to recognize good business.

The Beatles’ life as a rock’n’roll band– their fabled first acts in Hamburg clubs and Liverpool’s Cavern– is mostly lost to us. The party line on Please Please Me is that it’s a raw, high-energy run-through of their live set, but to me this seems just a little disingenuous. It’s not even that the album, by necessity, can’t reflect the group’s two-hour shows and the frenzy-baiting lengths they’d push setpiece songs to. It’s that the disc was recorded on the back of a #1 single, and there was a big new audience to consider when selecting material. There’s rawness here– rawness they never quite captured again– but a lot of sweetness too, particularly in Lennon-McCartney originals “P.S. I Love You” and “Do You Want to Know a Secret”.

Rather than an accurate document of an evening with the pre-fame Beatles, Please Please Me works more like a DJ mix album– a truncated, idealized teaser for their early live shows. More than any other of their records, Please Please Me is a dance music album. Almost everything on the record, even ballads like “Anna”, has a swing and a kick born from the hard experience of making a small club move. And it starts and ends with “I Saw Her Standing There” and “Twist and Shout”, the most kinetic, danceable tracks they ever made.

The “evening with the band” feel makes Please Please Me a more coherent experience than other cover-heavy Beatles albums: Here other peoples’ songs work not just as filler, but as markers for styles and effects the band admired and might return to as songwriters. McCartney, for instance, would go on to write songs whose drama and emotional nuance would embarrass “A Taste of Honey”, but for now he puts his all into its cornball melodrama, and the song fits.

Please Please Me also works as a unit because the group’s vocals are so great. At least some of this is due to the remastering, which makes the Beatles’ singing thrillingly up-close and immediate. I’d never really paid much attention to “Chains” and the Ringo-led “Boys”, but the clearer vocals on each– “Chains”‘ sarcastic snarls and the harmonies helping Ringo out– make them far more compelling.

And as you’d imagine, making the voices more vivid means Lennon’s kamikaze take on “Twist and Shout” sounds even more ferocious. Done in one cut at the session’s end, it could have been an unusable wreck. Instead, it’s one of the group’s most famous triumphs. This sums up the Beatles for me. Rather than a band whose path to the top was ordained by their genius, they were a group with the luck to meet opportunities, the wit to recognize them, the drive to seize them, and the talent to fulfil them. Please Please Me is the sound of them doing all four.