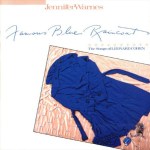 Don’t expect this song to ever be tonally correct. It runs the gamut from bright to too bright to excrutiatingly bright. Steve Hoffman told me that he took out something like 6 DB at 6K, and I’m guessing that that’s the minimum that would need to come out. It’s made to be a hit single, and like so many hit single wannabes, it’s mixed bright.

Bird on a Wire

Those big drum thwacks make this song work — if you don’t have a big system, forget about ever hearing this song do what it’s supposed to.

The saxophone should sound perfect on a properly mastered version of this record: full-bodied, yet lively.

This is a good test for transparency — the clarity of the little bells and the amount of ambience surrounding the guitar are a good indication of how resolving your system is. Of course, brighter and thinner pressings will emphasize the clarity of these instruments, so it’s easy to be fooled by this sort of thing as well.

When the voices come in, they should sound tonally correct. Whatever changes you make in your stereo to hear those opening bells more clearly, just make sure that the voices still sound right when you are done.

One of the best songs on the album. It builds to a truly powerful climax.

Ain’t No Cure for Love

This song tends to be bright and somewhat spitty.

Coming Back to You

One of the most emotionally powerful songs on the record.

A Singer Must Die

The multi-tracked chorus of voices should be amazing sounding if you have a good copy and a big room to play your stereo. I once heard this at a stereo store where the room was about 30 feet square with a 20 foot (!) ceiling, the speakers well out into the middle of the room. Even though the tonality was a bit wrong, each of a half or dozen or more singers clearly was occupying his or her own space. I remember it to this day; it was breathtaking.

But like most audiophile systems, it got some things right and some things ridiculously wrong. Jennifer — the person whose name is on the album — didn’t sound right. She sounded like she had a blanket over head. The owner of the audio store did not seem to be bothered by that fact, or to notice it all for that matter.

Came So Far for Beauty

Another one of the best tracks. The last three songs on this side are as good as it gets.