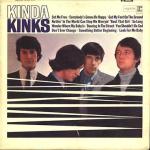 More of the Music of The Kinks

Reviews and Commentaries for the Music of The Kinks

This Pink and Green Reprise original MONO pressing is lively, balanced and vibrant, with a healthy dose of the Tubey Magical Richness The Kinks’ recordings need in order to sound the way they should.

Less grit – smoother and sweeter sound, something that is not easy to come by on any vintage Kinks album.

More bass and tighter bass. This is fundamentally a rock record. It needs weight down low to rock the way The Kinks wanted it to.

The Kinks’ second album, Kinda Kinks, was rush-recorded on either side (and in the midst) of a world tour that took them all the way to Australia in the course of bridging the 1964-1965 New Year.

Under those circumstances, the fact that every cut but one was an original was no small tribute to the songwriting ability of Ray Davies, even if most of the songs were less than first-rate — because what was first-rate was also highly memorable, and what wasn’t also wasn’t bad. In the space of two frantic late-December and mid-January sessions, and a brutal week in February of 1965, the group cut 11 songs to fill out a long-player that was already destined to contain “Tired of Waiting for You” (a product of the previous summer’s work, held back by producer Shel Talmy for a single).

Also along for the ride were the latter’s driving B-side “Come on Now” and “Something Better Beginning” (both cut in December 1964). So the resulting record was uneven but filled with promise, and possessed of at least three bright spots — additionally, and equally important, this album showcased a much more sophisticated sound, Dave Davies’ guitar turned down (and even switched to acoustic in a couple of spots) as Ray Daviesbegan exploring aspects of emotions and storytelling that transcended anything in the group’s prior output — “Nothin’ in This World Can Stop Me Worryin’ ‘Bout That Girl” may have been a mouthful of a title, but it also put them right in the front of the British Invasion pack for seriousness and complexity, out in front of where the Beatles or almost any of the competition were in early 1965, but it didn’t stop them from switching gears to the bluesy “Naggin’ Woman.”