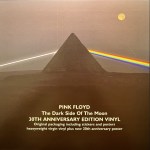 The 30th Anniversary Heavy Vinyl pressing is TOO BRIGHT. There is a boost in the top end, probably right around the 12K region, which is a very poor mastering choice the late Doug Sax apparently made, a choice that is surely not doing this recording any favors. In fact, in the case of this new pressing, it’s positively ruinous.

The following is reproduced from a letter we received, with our reply, regarding the Heavy Vinyl pressing of Dark Side discussed above.

I received this DSOTM yesterday…

First I played the 180gm 25th anniversary release, so I listened to the first side. While it didn’t necessarily ‘grab’ me, I sat through and listened, with the assumption that I really needed to get a feel for this to do a somewhat critical A/B listening experience.

Then I put this Hot Stamper on.

From the very beginning, I heard vocals I never heard before, in my 12 years of listening to this album. There was such a dramatically engaging ‘dreamlike’ flow to the music, that I have never experienced before! The soundstage was so 3-dimensional, the speakers disappeared, and moment after moment, I completely forgot I was sitting in my living room!

NEVER would I have thought a single record could make this kind of difference… it was TRULY one of those rare experiences – a revelation, of recreating an actual concert in one’s listening room.

While my system is quite modest by most accounts, this is a new chapter in the music playback book, to hear/ listen to something that is so lifelike, everything else disappears.

I look forward to enjoying this for a lifetime.

Dan started out by emailing me about having some records cleaned, especially a copy of the Dark Side on Heavy Vinyl remastered for the 25th Anniversary of its release, by Doug Sax with the assistance of Kevin Gray (basically just using Kevin’s mastering chain).

Dan, this is not a good sounding record. Cleaning it won’t help it much. Boosted top, zero ambience, it’s a dog on most levels.

My excuse for being curt? Who has time to waste talking about a bad sounding record? The world is full of them. Their shortcomings are obvious to anyone with even a halfway-decent stereo. (Apparently such stereos are in shorter supply than you might think.) But everything is relative; the Heavy Vinyl beat Dan’s SACD, so he naturally concluded that it must be pretty good, since SACD is widely considered the latest and greatest digital software around.

But we here at Better Records think all this digital foolishness is a load of crap. A dead end. The reason we think that is that we have access to amazing sounding pressings of records like Dark Side, and they have the kind of sound no CD or digital media of any kind — in our experience — has ever had. We call them – you guessed it — Hot Stampers.

When Dan asked if we had a Hot Stamper that would blow his mind and blow that Heavy Vinyl version right out of the water, I said “Hell Yeah!”

The rest is history I guess.

By the way, there’s a reason Dark Side is considered one of our Rock and Jazz Top Ten Titles: It’s absolutely one of the most amazing sounding records I have ever heard in my life. It’s the kind of record that makes all the hard work and money you’ve put into your stereo over the years pay off. And if you haven’t put a lot of hard work and money into your stereo, you don’t know what you’re missing.