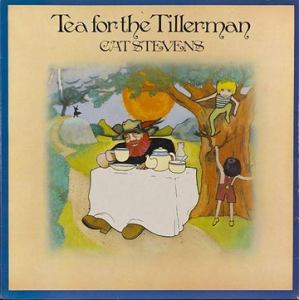 Sometimes the copy with the best sound is not the copy with the quietest vinyl. The best-sounding copy is always going to win the shootout, the condition of its vinyl notwithstanding. If you can tolerate the problems on this pressing you are in for some amazing Cat Stevens music and sound. If for any reason you are not happy with the sound or condition of the album we are of course happy to take it back for a full refund, including the domestic return postage.

Hearing this Hot Stamper is a PRIVILEGE that affords the listener insight into Cat Stevens’ music that is simply not possible any other way.

This is, I hope it goes without saying, one of the greatest Folk Rock records of all time, the kind of music that belongs in any collection. I’ve been playing this album for 40 years and I can honestly say I’ve never once tired of hearing it. I do get tired of hearing bad copies.

Cat’s mixes are full of subtle elements that may require many listening sessions over the course of years, even decades, to recognize and appreciate. Consider them an extra reward for having played the record so many times. I’ve played hundreds of copies over the last thirty-plus years and never tired of it once. As every music lover knows, the best albums only get better with time.

This vintage Pink Label Island pressing has the kind of Tubey Magical Midrange that modern records can barely BEGIN to reproduce. Folks, that sound is gone and it sure isn’t showing signs of coming back. If you love hearing INTO a recording, actually being able to “see” the performers, and feeling as if you are sitting in the studio with the band, this is the record for you. It’s what vintage all analog recordings are known for — this sound.

This is a longtime audiophile favorite for both music and sound. For those of you who love folky, acoustic guitar pop — often known as Hippie Folk Rock — you should find a lot to like about the sound of this Hot Stamper pressing.

Tubey Magical Acoustic Guitar reproduction is superb on the better copies of this album. Simply phenomenal amounts of Tubey Magic can be heard on every strum, along with the kind of richness, body, and harmonic coherency that have all but disappeared from modern recordings (and especially from modern remasterings — just play the 200-gram pressing put out by Analogue Productions to hear a version with virtually none of the three).

What We’re Listening For on Tea for the Tillerman

You can easily hear that smear on the guitar transients; usually they’re a tad blunted, and the guitar harmonics don’t ring the way they should.

These problems are just as common to the Pink and Sunray Label UK Island pressings as they are to the Brown Label A&M domestic pressings. Smeary, veiled, top end-challenged pressings were regularly produced on both sides of the pond.

Tea for the Tillerman sounds best this way: