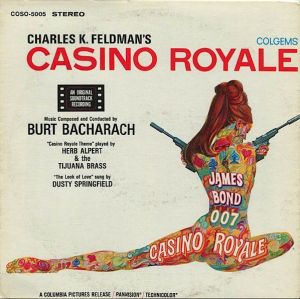 The space is big and the sound relatively rich (although the sound does vary quite a bit from track to track). The vocals have notably less hardness than most and the orchestra is not as brash as it can be on so many of the copies we audition. Huge amounts of Tubey Magic as well, which is key to the best sounding copies, and critical to The Look of Love. The sound needs weight, warmth and tubes or you might as well be playing a CD.

It’s beyond difficult to find Hot Stamper pressings of this album — heck, it’s hard to find ANY clean copy these days, let alone one that sounds great. Both sides are cleaner and clearer than most pressings yet still as rich and full as you’d want them to be. You won’t see too many copies of this one hitting the site, so if this music is up your alley and you have the stereo to play a seriously difficult recording such as this, you might want to jump right on it.

Having heard the best sounding pressings I now understand why this has been such a highly regarded long-term resident of the TAS Superdisc List. The best copies are SUPERDISCS… while the average copy of this album is anything but. Who could take such harsh, grainy, thin, veiled, compressed sound seriously? What was Harry Pearson smokin’?

I can honestly and truthfully say that until we discovered the Hot Stampers for this album, I never thought this record deserved the praise Harry heaped upon it. Now I do. I once was blind but now I see, or something like that. And by the way, does his copy sound as good as this one? Let’s face it: the late Harry Pearson was simply not the kind of guy who would sit down with five or ten copies and shoot them out.

When you listen to the average pressing of Casino Royale, you get the feeling that you’re hearing a standard-issue, boxy, lightweight, blary ’60s soundtrack. Perhaps you hear some promise in the recording, but it’s a promise that’s unfulfilled by the record on your turntable. This copy will completely redefine what you know about the sound of this music.

Copies with rich lower mids and nice extension up top (to keep the string arrangements from becoming shrill) did the best in our shootout, assuming they weren’t veiled or smeary of course. So many things can go wrong on a record! We know, we heard them all.

What We’re Listening For on Casino Royale

Bacharach excelled at these kinds of musical cut-ups, but thankfully he used liberal doses of humor and melody to keep the proceedings from turning too rarefied or messy. At times, the humor even turns to camp, as it does with the manic hodgepodge of circus themes, gypsy music, and lounge grind on ‘Home James, Don’t Spare the Horses.’ The more recognizable and certainly more straightforward side of Bacharach is here, too, on the Dusty Springfield smash ‘The Look of Love.’ This is one of Bacharach’s best soundtracks and a good buy for seasoned fans.

A word of caution: Unless your system is firing on all cylinders, even our hottest Hot Stamper copies — the Super Hot and White Hot pressings with the biggest, most dynamic, clearest, and least distorted sound — can have problems . Your system should be thoroughly warmed up, your electricity should be clean and cooking, you’ve got to be using the right room treatments, and we also highly recommend using a demagnetizer such as the the Walker Talisman on the record, your cables (power, interconnect and speaker) as well as the individual drivers of your speakers.