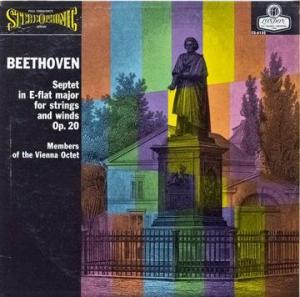 We normally do not put as much effort into finding top quality pressings of chamber music as we do for the large orchestral works favored by audiophiles (or at least the audiophiles who are willing to spend the money to buy our records), works such as Scheherazade and The Planets. However, if more of them sounded as good as this one we would be more than happy to do just that.

This vintage London pressing (the first cover pictured is the one on offer here) has the kind of Tubey Magical Midrange that modern records can barely BEGIN to reproduce. Folks, that sound is gone and it sure isn’t showing signs of coming back. If you love hearing INTO a recording, actually being able to “see” the performers, and feeling as if you are sitting in the studio with the band, this is the record for you. It’s what vintage all analog recordings are known for — this sound.

On the best pressings, the sound is both rich and sweet, with easily recognized, unerringly correct timbres for all seven of the instruments in the work. The legendary 1960 Decca Tree microphone setup had worked its magic once again. The sound is spacious and exceptionally transparent.

If you want to hear a gorgeous clarinet, this is the album for you. So big and open, with space for every player, each of them clearly laid out across the stage, this is vintage analog at its best.

This is precisely what careful shootouts and critical listening are all about. If you like Heavy Vinyl, what exactly is your frame of reference? How many good early pressings could you possibly own, and how were they cleaned?

Without the best pressings around to compare, Heavy Vinyl can sound fine; it’s only when you have something better that its faults come into focus. (We, of course, have something much, much better, and we like to call them Hot Stampers!)

The famous Moon and Gray London/Decca guide raves about this title, scoring it for music and sound at 9 each. I don’t always agree with their estimates — knowing that they could not possibly have the number of copies necessary to definitively judge the vast majority of titles they’ve written about, how could I? — but here I would agree completely.

A nearly flawless recording with a performance to match.

The Septet in E-flat major, Opus 20, by Ludwig van Beethoven, was sketched out in 1799, completed and first performed in 1800 and published in 1802. The score contains the notation: “Der Kaiserin Maria Theresia gewidmet”, or translated, “Dedicated to the Empress Maria Theresa.” It is scored for clarinet, horn, bassoon, violin, viola, cello, and double bass. It is in six movements.

The overall layout resembles a serenade and is in fact more or less the same as that of Mozart’s string trio, K. 563 in the same key, but Beethoven expands the form by the addition of substantial introductions to the first and last movements and by changing the second minuet to a scherzo. The main theme of the third movement had already been used in Beethoven’s Piano Sonata, (Op. 49 No. 2), which was an earlier work despite its higher opus number. The finale features a violin cadenza.

The scoring of the Septet for a single clarinet, horn and bassoon (rather than for pairs of these wind instruments) was innovative. So was the usually prominent role of the clarinet, as important as the violin, quite innovative.

The Septet was one of Beethoven’s most successful and popular works and circulated in many editions and arrangements for different forces. In about 1803 Beethoven himself arranged the work as a Trio for clarinet (or violin), cello and piano, and this version was published as his op. 38 in 1805. 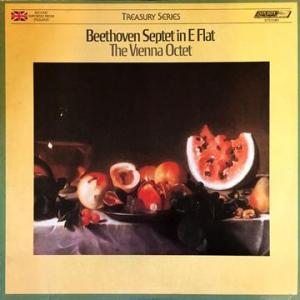