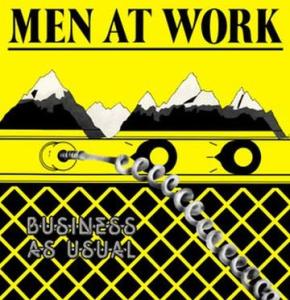 As a bit of background just in case you are not familiar with the album, the domestic pressings are horrendously bright. We have never played one that didn’t sound like the treble was jacked up to a level just this side of ear-bleed.

The only way to hear this album sound right is on Australian, Dutch, British and, more than a little surprisingly, even Japanese vinyl. Yes, we have heard them all. We’ve liked about one out of every one hundred Japanese pressings we’ve played over the last twenty years. We were surprised to find that the Japanese copy of Business As Usual we played many years ago was pretty good, for what that’s worth. (We can’t be sure that on our current system with our current ears we would feel the same.)

We tend to prefer the Brits but it seems that any import is worth a listen. The key as always is in the mastering and pressing.

Big and full-bodied, and much smoother than most, with energy like no other, the sound here immediately set the sonic bar very high. In the end it was the clear winner for the first side, which just happens to have both the big hits on it.

The sax and guitar are really jumpin’ out of the speakers here. Who knew?

What We’re Listening For on Business As Usual

Who Can It Be Now?
I Can See It In Your Eyes
Down Under
Underground
Helpless Automaton

Business as Usual became a surprise international hit on the basis of “Who Can It Be Now?” and “Down Under,” two excellent singles that merged straight-ahead pop/rock hooks with a quirky new wave production and an offbeat sense of humor.

Garry Raffaele opined that it “generally stays at a high level, tight and jerky … There is a delicacy about this music — and that is not a thing you can say about too many rock groups. The flute and reeds of Greg Ham do much to further that”.

McFarlane noted that “[a]side from the strength of the music, part of the album’s appeal was its economy. The production sound was low-key, but clean and uncluttered. Indeed, the songs stood by themselves with little embellishment save for a bright, melodic, singalong quality.”