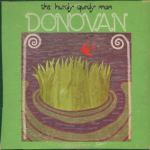 Reviews and Commentaries for the Music of Donovan

Side one is where you will find The Hurdy Gurdy Man and it is crazy good sounding here. No wonder: Hurdy Gurdy was engineered by Eddie Kramer and produced by none other than John Paul Jones.

Donovan records tend to be hit or miss affairs, but we were pleasantly surprised to find that we could not find a bad track on either side of the album. Most are in fact quite wonderful.  Both Yellow Label Epics and Orange Label Epics fared well in our shootout.

Some of these tracks may remind you more than a little of Pentangle. Danny Thompson, that band’s amazingly talented and unusually well recorded double bassist, just happens to be the bass player on the album. Go figure. Tony Carr does most of the drumming as he has on many of Donovan’s albums from the period. Needless to say, the rhythm section is first rate.

“Hurdy Gurdy Man” was undoubtedly Donovan’s hardest-rocking hit, though mystical folk-rock was still at the core of this 1968 number five hit single.

Certainly it started in as gentle a frame of mind as the typical Donovan song, with a hypnotic wordless vocal hum which reached back to the very roots of Celtic folk music, sounding like a prayer from a devotional ritual. The hum was then joined by a gentle acoustic guitar strum, and when Donovan began singing lyrics, set to one of his more beguiling tunes, some slight distortion made it sound as if his voice was traveling through time. When he got to the latter part of the verse, though, the hard rock bass, drums, and guitar piled on like gangbusters.

Donovan here sang of a hurdy gurdy man singing songs of love, given an Indian tinge by washes of tambura. The mantra-like invocational tone was amplified in the circular chorus, with overlays of blissful vocal harmonies hazily mixing with Donovan’s repetitions of variations of the title phrase. The guitar break had some mind-melting Eastern-ish distorted sustain, giving a definitive lie to those who would cast Donovan as a namby-pamby who didn’t have it in him to rock out.

Among the supporting musicians indeed were three soon-to-be members of Led Zeppelin: Jimmy Page (who played the lead guitar, and had already contributed to Donovan sessions in the past), John Paul Jones (likewise a veteran of sessions for Donovan and many others), and John Bonham.

Was there a hidden meaning behind this ode to a hurdy gurdy man? Many were tempted to read one into the tune, seeing it as a bemused commentary on the Maharishi (whom Donovan studied with around this time) or a bemused self-portrait of sorts. As the song that relied so heavily on those mantra-like repetitions, it was well-suited to an elongated fade in which Donovan’s voice continued to chant about the Hurdy Gurdy Man as drums and fierce electric guitars swirled around him.

The Hurdy Gurdy Man is the sixth studio album (seventh overall) by British singer/songwriter Donovan, released in the US in October 1968 (Epic Records BN 26420 (stereo)), but not in the UK, because of a continuing contractual dispute that also prevented Sunshine Superman and Mellow Yellow from a UK release. A songbook of lead sheets to the album was nonetheless issued in both countries.

Donovan wrote and recorded much of The Hurdy Gurdy Man in late 1967 not long after recording the songs that would form A Gift from a Flower to a Garden. The rest of The Hurdy Gurdy Man was recorded in April 1968, after he visited Rishikesh, India to study under Maharishi Mahesh Yogi. John Lennon, Cynthia Lennon, George Harrison, Pattie Boyd, Paul McCartney, Jane Asher, Mia Farrow, Prudence Farrow, and Mike Love were there as well. Donovan has since said in concerts that Harrison wrote a verse for “Hurdy Gurdy Man” when they were in India, but it wasn’t recorded for the studio version. On his 1973 live album Live in Japan: Spring Tour 1973 and his 1990 live album Rising, Donovan explains the story and sings the previously omitted verse.

Donovan’s songwriting for The Hurdy Gurdy Man centered around drones on such songs as “Peregrine”, “The River Song” and “Tangier” (the latter two being compositions by his good friend Gypsy Dave AKA Gyp Mills), and pop music on most of the other tracks. “As I Recall It” continues Donovan’s infatuation with jazz. “Jennifer Juniper” and “Hurdy Gurdy Man” were both released as singles well before the album was released.

The recording sessions for the album are purported to have included future Led Zeppelin members Jimmy Page and John Paul Jones. Page was in The Yardbirds at the time and was actively looking to rebuild that band. The album credits John Bonham for percussion on the song and Clem Cattini as the drummer.