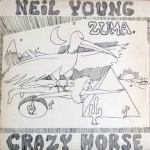 Richard Feynman gave a series of lectures concerning the workings of the scientific method. Here is an excerpt from one of them that I would like you to keep in mind as you read the discussion below.

“Now I’m going to discuss how we would look for a new law. In general, we look for a new law by the following process. First, we guess it (audience laughter), no, don’t laugh, that’s the truth. Then we compute the consequences of the guess, to see what, if this is right, if this law we guess is right, to see what it would imply and then we compare the computation results to nature or we say compare to experiment or experience, compare it directly with observations to see if it works.

Back in 2015 a mastering engineer by the name of Phil Brown contacted me in reference to a Hot Stamper pressing of Neil Young’s Zuma he had seen in our mailer. (Apologies in advance for not giving out the stamper numbers; we frown on that sort of thing around here.) He wrote:

I see it’s a featured disc in the newsletter. I’m curious what the matrix numbers are since I mastered it.

I replied as follows.

Phil, you did a great job, we love the sound of Zuma!

The top copy has sold so we don’t know the numbers, but the next best copy is 1[redacted], 1[redacted]. For side one we have also liked 1[redacted] in the past, and we had a 1[redacted] side.

Of course, all these numbers are just as likely to sound bad, or mediocre, as to sound good. We buy any clean Zuma original we can find and let the sonic chips fall where they may. Anyway, once again, good job!

He then offered this:

I can explain the numbering system for you if you like.

[Three numbers and letters, redacted] are from the original run of lacquers and [redacted] would have been from the first recuts so I did those as well.

Sure, would love to learn more.

Well, what would you like to know? For instance, Zuma was pressed by Columbia. Dash numbers 1A and 1B were pressed at Pitman, F was pressed at Santa Maria, the best plant CBS had at the time. C and D would have been pressed at Terre Haute. H would be a recut and could go anywhere. I worked for CBS and Warners and know all about those companies.

This is where I take issue with him on how helpful the information he provided may or may not be.

Phil, interesting stuff but probably not of much use to us in our work. Any of those stampers can sound good or bad and we have to play them all to know which are which so the pressing plants are not really much of a concern, unless of course one plant were to be exceptionally good or bad, and we have not found that to be the case.

How can you tell if you don’t know the matrix numbering systems and how they worked? At any rate, I’m not a customer so it doesn’t really matter and your model of selling records that you’ve verified sound good works.

Phil, point well taken, but we don’t sell copies made from dubs, there are plenty of good originals around.

Phil, there is no way to know whether a record is any good without playing it, early stamper, late stamper or any other stamper. First pressings (A, 1A, A1) rarely win shootouts. If they did we would simply buy only those stampers.

So many other things go into the production of a record that have nothing to do with how early the stamper is that A versus B versus C becomes practically meaningless. There is a hot stamper for a certain Zep album that always wins the shootouts, [redacted]. Beats the hell out of A and B. In fact we don’t even buy those other stampers because they are expensive and rarely sound good enough to recoup our investment.

Some of the hottest stampers for other Zeps are D, E and F. But that doesn’t mean we don’t buy A, B and C on those titles because they can still be pretty good. When you’ve played these kinds of records by the score over the course of twenty odd years you learn things empirically that no one who hasn’t done the work can know, and that is why we do things the way we do them: because it works. Customers are very happy these days, and that’s what really counts.

Well, the Led Zep discs you like are from the first run of lacquers. And if you think I haven’t listened to thousands of records over the past 40 years you’re mistaken.

And then he wished me luck. I added one last note:

Phil, I’m sure you have listened to plenty of records, but the trick is to listen to plenty of the same title, by the score. That’s when you hear how different they all sound. If anyone was doing this kind of thing twenty years ago when I started doing it I have yet to find any evidence of it.

And of course no one is really doing it at any kind of serious scale at the present time other than us. That’s because it’s hard and it’s time consuming work.

And that was the end of that.

What he can’t do is hand you a record that has the stamper numbers he thinks are the best ones and say with certainty that the record he gives you will sound better than other copies.

We can do that, and anyone who does careful shootouts with lots of copies, properly cleaned, using the highest quality playback equipment, following a rigorous scientific approach, who has well-trained hearing, can do that.

But if you haven’t cleaned the record and played it against other pressings, you really can’t know what it sounds like.

I will leave you, dear reader, with another thought from Mr Feynman.

“Science is the belief in the ignorance of the experts.”

And a nice commentary that we wrote about that very subject:

A Frequently Asked Question – What makes you guys think you know it all?