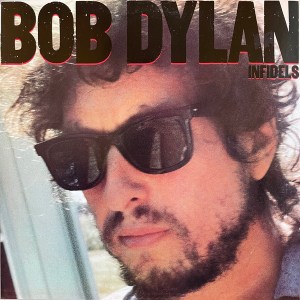 This is one of the better sounding Dylan records from the ’80s. It’s not exactly Blood on the Tracks, the only Dylan album we think is qualified to be on our Top 100 Rock and Pop List, but it sounds good for a record from this era.

What We’re Listening For on Infidels

Jokerman
Sweetheart Like You
Neighborhood Bully
License To Kill

Infidels was the first secular record Bob Dylan recorded since Street Legal, and it’s far more like a classicist Dylan album than that one, filled with songs that are evocative in their imagery and direct in their approach. This is lean, much like Slow Train Coming, but its writing is closer to Dylan’s peak of the mid-’70s, and some of the songs here — particularly on the first side — are minor classics, capturing him reviving his sense of social consciousness and his gift for poetic, elegant love songs.

For a while, Infidels seems like a latter-day masterpiece, but toward the end of the record it runs out of steam, preventing itself from being a triumph. Still, in comparison to everything that arrived in the near-decade before it, Infidels is a triumph, finding Dylan coming tantalizingly close to regaining all his powers.

Infidels was produced by Mark Knopfler, best known as the frontman of the band Dire Straits. Dylan initially wanted to produce the album himself, but feeling that technology had passed him by, he approached a number of contemporary artists who were more at home in a modern recording studio. David Bowie, Frank Zappa, and Elvis Costello were all approached before Dylan hired Knopfler.

Knopfler later admitted it was difficult to produce Dylan. “You see people working in different ways, and it’s good for you. You have to learn to adapt to the way different people work. Yes, it was strange at times with Bob. One of the great parts about production is that it demonstrates to you that you have to be flexible. Each song has its own secret that’s different from another song, and each has its own life. Sometimes it has to be teased out, whereas other times it might come fast. There are no laws about songwriting or producing. It depends on what you’re doing, not just who you’re doing. You have to be sensitive and flexible, and it’s fun. I’d say I was more disciplined. But I think Bob is much more disciplined as a writer of lyrics, as a poet. He’s an absolute genius. As a singer—absolute genius. But musically, I think it’s a lot more basic. The music just tends to be a vehicle for that poetry.”

Once Knopfler was aboard, the two quickly assembled a team of accomplished musicians. Knopfler’s own guitar playing was paired with that of Mick Taylor, a former lead guitarist of the Rolling Stones. Having been introduced to Taylor the previous summer, Dylan had developed a friendship with him that resulted in the guitarist hearing the Infidels material first during the months leading up to the April sessions. In addition, the sessions benefited as well from Taylor’s ability as a slide guitarist.

Knopfler said about the instrument he plays on Infidels: “I still haven’t got a flat-top wooden acoustic, because I’ve never found one that was as good as the two best flat tops I ever played. One … was a hand-built Greco that Rudy Pensa, of Rudy’s Music Stop lent me. I used … the Greco on Infidels.”

Knopfler suggested Alan Clark for keyboards as well as engineer Neil Dorfsman, both of whom were hired. According to Knopfler, it was Dylan’s idea to recruit Robbie Shakespeare and Sly Dunbar as the rhythm section. Best known as Sly & Robbie, Shakespeare and Dunbar were famed reggae producers as well as recording artists in their own right.

“Bob’s musical ability is limited, in terms of being able to play a guitar or a piano,” said Knopfler. “It’s rudimentary, but it doesn’t affect his variety, his sense of melody, his singing. It’s all there. In fact, some of the things he plays on piano while he’s singing are lovely, even though they’re rudimentary. That all demonstrates the fact that you don’t have to be a great technician. It’s the same old story: If something is played with soul, that’s what’s important.”