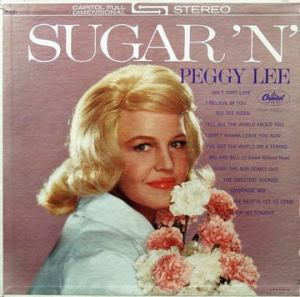 What We’re Listening For on Sugar ‘N’ Spice

This set is a gem in the Peggy Lee discography. The lively arrangements and great playing from the small jazz combo are the perfect complement to Ms. Peggy’s smooth-but-expressive vocals.

Despite the tacky cover photgraphs and that terrible wig, the contents are pure and fine Peggy Lee at her best. Where some of Peggy’s albums in the 1960’s included much forgettable contemporary material that hasn’t stood the test of time too well, this album features a program of songs that range from contemporary show tunes (“I Beleive In You” and “The Sweetest Sounds”), an excursion into the blues (“See, See Rider”) and the great American song book (“When The Sun Comes Out” and “I’ve Got The World On A String”) plus a few lesser known numbers for good measure.

Peggy is in fine voice and brings her sweet feminine tones to her ballads and her salty, seductive sounds to the more uptempo material. The backings are by Benny Carter and feature a compact orchestra with an emphasis on brass. Of interest here, too, for those familiar with Peggy’s appearance on “The Judy Garland Show” is Peggy’s solo treatment of the novelty “Big Bad Bill” which is a comic highlight. All in all, this is a fine album that should delight the Peg-o-philes among us as well as those who admire this legend to a lesser degree. As a starting point with Peggy Lee, it should be remembered that none of the Lee signature tunes are found on this collection but it does give ample evidence of the lady at her best. This issue also includes three bonus tracks not on the original album.