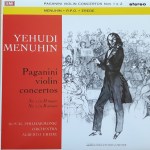 We managed to get hold of the Heavy Vinyl pressing put out by Fenn Music in Germany, about which a well known record dealer on the web (you may recognize the style) had this to say:

“Stunning Reissue Of EMI ASD 440 Recorded In Stereo In 1961. This Recording Featuring The Royal Philharmonic Conducted By Alberto Erede Provides Convincing Proof, If Any Were Needed, That Menuhin Was One Of The Great Violinists Of The 20th Century.”

The “convincing proof” provided by this record is that those responsible for it are Rank Incompetents of the Worst Kind (see what I did there?). Screechy, bright, shrill, thin and harsh, it’s hard to imagine worse sound to be subjected to from this piece of Heavy Vinyl trash.

Had I paid good money to buy this pressing from 2004 in the hopes of hearing the supremely talented Yehudi Menuhin of 1961 tear it up on Paganini’s legendary first two concertos, I can tell you one thing: I would be pissed.

Where is the outrage in the audiophile community over this kind of trash? I have yet to see it. I suspect I will grow quite a bit older and quite a bit greyer before anyone else notices just how bad this record sounds. I hope I’m proven wrong.

NO warmth. NO sweetness. NO richness. NO Tubey Magic. In other words, NO trace of the original’s (or the early reissue’s) analog sound. I may own at most one or two classical CDs that sound this bad, and I own quite a few.

I have to wonder how records this awful get released.

Then again, the Heavy Vinyl Buyer of today is not known for his discrimination. If he were, Sundazed and Analogue Productions would have gone out of business many years ago.

This link will take you to some other exceptionally bad records that, like this one, were marketed to audiophiles for their supposedly superior sound. On today’s modern systems, it should be obvious that they have nothing of the kind and that, in fact, the opposite is true.