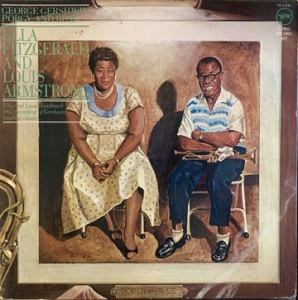 Sometimes the copy with the best sound is not the copy with the quietest vinyl. The best-sounding copy is always going to win the shootout, the condition of its vinyl notwithstanding. If you can tolerate the problems on this pressing you are in for some amazing music and sound. If for any reason you are not happy with the sound or condition of the album we are of course happy to take it back for a full refund, including the domestic return postage.

The sound is big, open, rich, and full, with the performers front and center. Ella and Louis are no longer representations — they’re living, breathing persons. We call that “the breath of life,” and this record has it in spades. Their voices are so rich, sweet, and free of any artificiality, you immediately find yourself lost in the music because there’s no “sound” to distract you.

These vintage Verve LPs have the kind of Tubey Magical Midrange that modern pressings barely BEGIN to reproduce. Folks, that sound is gone and it sure isn’t showing any sign of coming back.

Having done this for so long, we understand and appreciate that rich, full, solid, Tubey Magical sound is key to the presentation of this primarily vocal music. We rate these qualities higher than others we might be listening for (e.g., bass definition, soundstage, depth, etc.). The music is not so much about the details in the recording, but rather in trying to recreate a solid, palpable, real Ella Fitzgerald and a real Louis Armstrong singing together, live in your listening room. The best copies have an uncanny way of doing just that.

If you exclusively play modern repressings of older recordings (this one is now 63 years old), I can say without fear of contradiction that you have never heard this kind of sound on vinyl. Old records have it — not often, and certainly not always — but less than one out of 100 new records do, if our experience with the hundreds we’ve played can serve as a guide.

Want to know what we are on about with all this talk of hardness and brashness on records of this vintage? Unless you have been exceptionally fortunate to have chanced upon a properly mastered and pressed and cared for copy, you will hear plenty of both on most pressings.

It’s one of the main reasons we have such a hard time doing shootouts for Ella’s ’50s and ’60s albums. The other of course is the poor condition most copies are in. Few pressings do not have marks that play or damaged grooves. The record players of the ’50s and ’60s, not to mention their owners, were ruinous on the records of the day.

Obviously, we wouldn’t bother if the music and sound weren’t so good. When you are lucky enough to find a copy that sounds as good as this one, you cannot help but recognize that this era for Ella will never be equaled, by her or anyone else.

What We’re Listening For on Porgy and Bess

A Must Own Duet Album

My Man’s Gone Now
I Got Plenty O’ Nuttin’
Buzzard Song
Bess, You Is My Woman Now

It Ain’t Necessarily So
What You Want Wid Bess?
A Woman Is A Sometime Thing
Oh, Doctor Jesus

Producer Norman Granz oversaw two Porgy & Bess projects. The first involved Ella Fitzgerald and Louis Armstrong, and came together during the autumn of 1957 with brassy big band and lush orchestral arrangements by Russ Garcia. This is the classic Verve Porgy & Bess, and it’s been reissued many, many times. The second, recorded during the spring and summer of 1976 and issued by RCA, brought Ray Charles together with versatile British vocalist Cleo Laine, backed by an orchestra under the direction of Frank DeVol.

A comparison of these two realizations bears fascinating fruit, particularly when the medleys of street vendors are played back to back. Those peasant songs, used in real life to purvey honey, strawberries, and crabs, were gathered and notated by George Gershwin and novelist Du Bose Heyward in 1934 during a visit to Folly Island, a small barrier island ten miles south of Charleston, SC, known today as Folly Beach. As Charleston Harbor had been one of the major ports during the importation of slaves from Africa, the waterfront was mostly populated by Gullahs, a reconstituted community that retained and preserved its ancestral cultures and languages to unusual degrees. Gershwin, who even learned to chant with the Gullah, absorbed the tonalities of the street cries he heard and wove them — along with all of the other impressions stored within his sensitive mind — into the fabric of his opera. What’s really great about the Ella and Louis version is Ella, who handles each aria with disarming delicacy, clarion intensity, or usually a blend of both.

Her take on “Buzzard Song” (sung 19 years later by Ray Charles) is a thrilling example of this woman’s intrinsic theatrical genius. Pops sounds like he really savored each duet, and his trumpet work — not a whole lot of it, because this is not a trumpeter’s opera — is characteristically good as gold. This marvelous album stands quite well on its own, but will sound best when matched with the Ray Charles/Cleo Laine version, especially the songs of the Crab Man, of Peter the Honey Man, and his wife, Lily the Strawberry Woman.