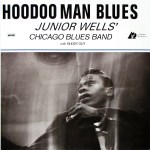 One of our good customers had this to say about a record he played recently:

Not a hot stamper update, but thought to write briefly…

I’ve been experimenting a bit with some of the Analogue Productions stuff, as unlike you I’ve had some mixed success here. However…

OMG. I just opened their pressing of Junior Welles’ Hoodoo Man Blues. It’s, pardon my crudity, not fit to wipe your ass with. The most disgusting perversion of this record imaginable. I’m choking even hearing it. Rank amateurs at the controls it seems… how the hell did this get released??? Are they deaf? Are they even listening to what they’re putting out, or just pressing money? It’s too nauseating to describe, but all your usual terms fit exactly; no ambiance, bloated, unreal EQ, compressed and flat and dead, completely f*cking off. I’m just amazed.

The only reason I ventured here is that I have had some good luck with them on various jazz recordings, where the tricks do seem to help (45rpm, master tapes all analogue, etc.). Not so here. Everything you rage about holds true and is possibly the worst case of it I’ve ever come across.

Just sharing with the thought that there is a RANGE of AP stuff; it’s not all this bad. This pressing is escort-it-off-the-property-and-dispose-of-in-someone-else’s-garbage-can-bad.

(Meanwhile, latest box of hot stampers arrived today, and are glorious as usual.)

I take issue with any of AP’s records being any good.  None of their “tricks” ever managed to help them produce a record I would want to own. The best one I heard was Fragile, and even that was mediocre at best.

Here is a typical review for one of their godawful remasterings:

Vince Guaraldi – A Bloated Mess at 45 RPM from Acoustech

We flushed good money down the drain in order to suffer through the 45 Analogue Productions cutting of the album. What a mess. Ridiculously bloated overblown bass is its major shortcoming, but compression and an overall lifeless quality are obvious problems that made us give up on it pretty quickly.

Some audiophiles have complained that we spend too much time bashing Heavy Vinyl, but if ever a record deserved it, it’s that one. It’s a failure as a remastering and an insult to the analog buying audiophile public at large. Searching the web I am glad to see that no one seems to have anything nice to say about it as of this writing. No one should, but that has not deterred the reviewers and forum posters in the past.